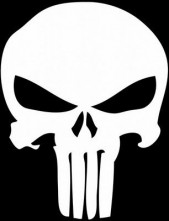 As the creative force behind some of pop-culture’s most iconic characters and heroes, Marvel Comics has quite a lot of intellectual property to protect. With so many films, comic books, video games and TV shows in the public spotlight, it must certainly be difficult to ensure that unlicensed products and representations of Marvel characters stay out of the mix.

This very situation has led Marvel to file suit against a number of companies for allegedly co-opting its iconic Punisher logo. Although the logo is similar to a traditional skull symbol, its elongated structure and hand-painted look make it immediately recognizable.

One company named in the suit, HHT Group, is accused of using the logo on a wide-ranging series of motorcycle parts and accessories, including brake levers, handlebar ends and seats.

Loyalty Bound LLC is also named for its use of a logo that is very similar to the Punisher’s on a series of products, including a line of beverage insulators. The brand appears to own a series of trademarks on these symbols and on names and phrases associated with Chris Kyle, a former U.S. Navy SEAL made famous by the film American Sniper. It appears that Loyalty Bound LLC is capitalizing on the veteran’s own use of a Punisher-esque skull symbol before his death in 2013.

This isn’t the first time that Marvel has had to resort to legal action in order to stop the use of its Punisher logo on promotional products and branded items by unrelated companies. In 2015, Marvel took Molon Labe LLC to court for its use of a strikingly similar logo on firearm-related products.

The Punisher symbol has become synonymous with vigilante justice and peacekeeping over the years, which has sometimes led to controversy beyond the issue of trademarks. Just this year, a Kentucky Police Department was forced to remove Punisher logos and Blue Lives Matter insignia from its squad cars. While the department claimed that the logo was meant to represent a warrior attitude and the notion of justice, residents felt threatened by the violence suggested by a skull symbol. Perhaps the police department is lucky that public outcry forced them to discontinue any use of the logo before Marvel's lawyers could have gotten involved. If Marvel's history of legal action is any indication, the department could very likely have ended up in court against the brand.

Let this be a warning for any distributors looking to use popular logos or characters on merchandise, especially if those logos are similar to anything created by Marvel. The multimedia giant is certainly not afraid to take action against possible trademark infringements.