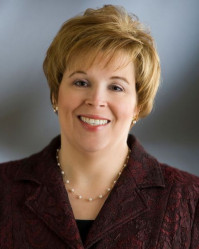 The PPAI Woman of Achievement award recognizes an individual who has led the way in the advancement of women in the industry, exhibited outstanding leadership, and made significant contributions to the industry and her community. The PPAI Woman of Achievement constantly strives to go above and beyond. She leads the way by setting the standard of excellence in the industry. She’s an inspiration to others, a role model and a mentor. She simply stands out in a crowd.

“To say that I am extremely honored would truly be an understatement," Tomasini said. "Receiving an award like this is beyond humbling. This honor truly causes me to reflect on all of the amazing people in my life that have been a source of inspiration and encouragement. I am thankful for all who have been and will be a part of my journey."

Tomasini, whose company became a member of PPAI in 1994, has been actively serving the association since 2013. She has served on numerous committees, including the PPAI Public Relations Committee, Government Relations Committee, Certification Committee and Leadership Advisory Committee. In 2016, Tomasini was elected to the PPAI Board of Directors and in 2017 served as Chair.

“No one exemplifies the PPAI Woman of Achievement more than Mary Jo,” said PPAI interim president Bob McLean, CPA, CAE, CEM. “It is such an honor to be able to recognize her with this award. Her commitment to the association, the industry, her community and businesswomen everywhere is extraordinary. She deserves all of the accolades.”

“Mary Jo has made it her life’s work to put others, especially women, ahead of herself," Wygonik said. "Mary Jo is liberal with her time and willingness to coach anyone who asks. She shares counsel with distributors and suppliers who count her as a friend and trust her insight. Mary Jo has a character that is rare. She is an authentic soul with calm energy and endless generosity. We could fill a book with her acts of kindness."

Tomasini will be officially recognized on June 21 from 6-7 p.m. during the Woman of Achievement celebration as part of the PPAI Women’s Leadership Conference Direct-2-You, a virtual event being held June 21-23, 2021.