We all like to feel appreciated. Joe and Tracy Troy, managing directors of Waterfront Branded Marketing Solutions Powered by Proforma, Westport, Conn., remember one promotion where a client wanted to show gratitude toward employees. But the Troys especially recall the overwhelming gratitude those employees showed them.

"Joe opened up a pharmaceutical client in the Northeast called Boehringer Ingelheim, and started working with their IT department, who wanted to do a global thank-you for some very complex IT they had just launched," Tracy Troy said "And when Joe went to the meeting, it started with, 'Yeah, we just want to do a thank-you gift and send it to all of our IT people to say thank you.' And, after some probing, Joe was able to say, 'Well, why don’t we give them multiple items that they can use at their desks that remind them how thankful you are and show constant gratitude?'" 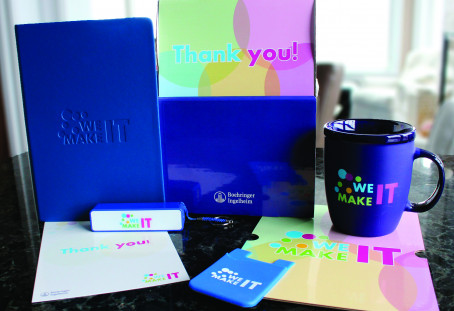 Joe Troy added that his more than two decades in the industry allowed him to see that, by offering a solution in three-and-a-half weeks over the Christmas holiday, you stand out.

"I would say you're crazy," he said. "There's no one that could do that. And somehow we could get that done. So we're pretty proud of that."

"It was incredibly well received," Tracy Troy added. "People were taking pictures of them[selves] receiving the boxes in the Philippines and sending it through, in Germany and sending it through. If you think about it from a corporate perspective, they spent $25. And the goodwill they'll receive from that is phenomenal."

But, as many of you who have been in the industry for a while know, it's rare that such a successful promotion comes without hurdles. Joe said it himself: Time was an immense hurdle here, and while they pulled it off, it wasn't easy.

"The first hurdle was their time frame, which originally was going to be a month and a half," he said. "As soon as we identified what items were going in, we started making the box. Then the time frame got kind of ramped up to, 'You know what, we need these to start arriving the first week of January.' So that was a little bit of a hurdle, but it’s what we do."

Tracy added that the company's attitude played a huge role, as well.

So, what can you as promotional products distributors do to pull of a similar promotion? Tracy and Joe stressed the importance of identifying all of the "why's" of the situation.

"Why are people doing what they’re doing?" Tracy said. "Why is the budget what it is? What do they want to accomplish at the very end? How do they want the person receiving the promotion to feel? And then, make sure you have all the basics down, even before you come up with one product idea. And the basics are: What’s the budget, how many do you want and what’s the timing? And those things can change, but certainly, without the direction of budget, timing and quantity, we have a challenge."

"You’re hitting it on the head with the 'why,'" Joe added "We care about … the impact our client is trying to get out of this promotion. So, from a marketing standpoint, that’s how we have to look at it. … The people who were sending pictures back to us with the huge smiles on their faces from around the world spoke volumes to how successful it was."