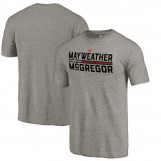 Fans of boxing and MMA (and maybe just some people who want to watch two specimens of physical achievement duke it out for $100) are eagerly anticipating the big fight between Floyd Mayweather and Conor McGregor tomorrow.

So, naturally, there's a lot of merchandise relating to the showdown in Vegas. And, reflecting the big money of the event, some of the commemorative merchandise comes at a hefty price.

Heavy reported that even some of the simpler items celebrating the "Money Belt" fight, like a tri-blend T-shirt from Fanatics, will run as high as $29.99 online. A "May/Mac" snapback baseball cap will cost the same.

The Daily Mail reported from the official merchandise booth in Las Vegas that a "Money Vs. Notorious" baseball cap costs about $45, and a T-shirt can cost as much as $38.

The big-ticket items are fitting for such a high-profile event, where the winner will earn a belt including 3,360 diamonds, 600 sapphires, 300 emeralds, and 1.5 kg of 24-karat gold, all of which is situated in Italian alligator leather, according to Complex. That's extravagant, to say the least.

On the purely promotional side, the fight has found a spot in hotels, too. The Las Vegas Review-Journal reported that the MGM Grand has Mayweather-McGregor room keys and door hangers in preparation for the big fight.

The MGM Grand has Mayweather-McGregor room keys and "Do Not Disturb" signs this weekend. pic.twitter.com/lEsVDeo9TT