Fitness trackers can be a good way to keep track of goals, train, and even save a life. And, with some fast food restaurants looking to provide healthier options for customers (especially kids), it makes sense that McDonald's Corp., Oak Brook, Ill., would give out fitness trackers in Happy Meals. But, the fast food restaurant now is removing the Step-It activity trackers from Happy Meals due to the risk of skin irritation. 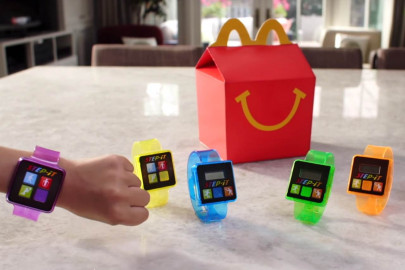 McDonald's has stopped giving away these fitness trackers due to reports of skin irritation. (Image via NBC News)

"We have taken this swift and voluntary step after receiving limited reports of potential skin irritations that may be associated with wearing the band," McDonald's Corp. spokeswoman Teri Hickey said in a statement to CNN. "Nothing is more important to us than the safety of our customers and we are fully investigating the issue."

It's unclear how many reports of skin irritation McDonald's Corp. received, but one mother in Arkansas wrote on Facebook that her child received burns from the fitness tracker after only using it for less than 10 minutes.

"If your kids have this happy meal toy, do not let them play with it," Casey Collyar wrote on Facebook. "Cason has a burn after playing with the toy for about 8 minutes. The toy has a red light in it that is powered by the battery on tieback that possibly is the cause of the burn."