We love seeing all the creative merch that comes out before Valentine’s Day, but people forget that February is also the beginning of the season for limited-edition Shamrock Shakes from McDonald’s. If you’re never had a Shamrock Shake, we suggest heading there immediately and ordering one. Seriously, you’re missing out. This year, McDonald’s is also auctioning off a “Golden Shamrock Shake,” and all money raised benefits Ronald McDonald House Charities. 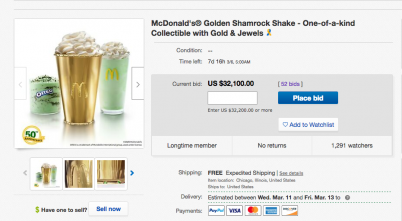 The Golden Shamrock Shake cup has a bejeweled McDonald's logo, is made of 18-karat gold and was created for the 50th anniversary of the Shamrock Shake. According to the eBay listing, the cup is one of a kind, and worth a pretty penny: 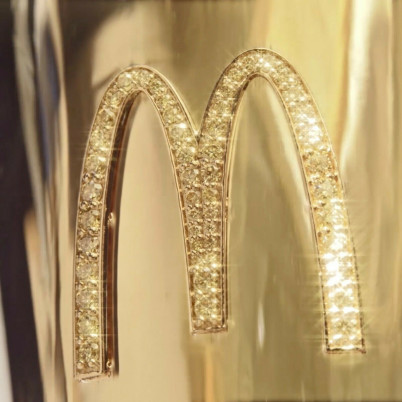 We love all those little details, and we also love that all proceeds benefit Ronald McDonald House Charities. McDonald's is also making it possible for fans to win the cup without spending a ton of money, as reported in a CNN article:

Anyone who wants to get their hands on the golden cup can also get a chance to win by ordering an Oreo Shamrock McFlurry or Shamrock Shake through the McDonald's app.

Though we're not sure how that works if the cup is one of a kind.

The auction ends on March 6 at 5 a.m., which means fans have just over a week to place their bids. And, since delivery is estimated between March 11 and 13, the winner will be able to fill their 18-karat cup with a celebratory Shamrock Shake before St. Patrick’s Day.

May the luck be with you!