McDonald's Teams Up With Japanese Clothing Brand for Merchandise

People love McDonald's. This is known. You can go pretty much anywhere in the world, and you'll see the golden arches somewhere. (As Vincent Vega in "Pulp Fiction" taught us, some countries change the item names a little bit, too.) So, it makes perfect sense that McDonald's wants to monetize that global hype every now and then.

Before, it was just the highly coveted Big Mac Sauce, which was only available as a promotion and then sold on eBay for exorbitant amounts of money.

For everyone who dropped thousands on the sauce, you may want to stop reading now. The sauce is back for sale, and it has company.

According to Hungry Forever, McDonald's teamed up with a Japanese clothing brand called Beams, to make McDonald's-themed apparel, like T-shirts and hats. Fans can also dig into* tote bags, clutches, iPhone covers and more. 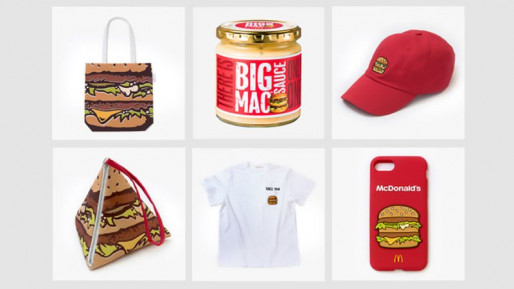 Time Money reported that the items are about $35 on the Japanese e-commerce site Rakuten, which ships internationally. Fans should act fast, though, because each item is limited to 300 pieces.

So, after seeing how high people listed bottles of sauce online for sale, these might become collectors items to invest in.

*(Editor's note: Don't really dig in as in eat them, except the sauce. Insert "eat your hat" joke here, though.)