Given its fast food restaurant chain status, McDonald’s will forever find folks thumbing their noses at its offerings. (A recent Facebook post by yours truly, for example, was met with a “Why are you poisoning yourself with that garbage in the first place?” comment when I dubbed a Philadelphia establishment “hell on earth.”) So, one might expect the detractors to include people with considerable clout, say someone designated as a member of the Order of the British Empire. That order of chivalry, which is celebrating its centennial this year, includes lauded designer Julien Macdonald, who, rather than ribbing the franchise, has crafted a Signature Collection luxury burger box for its United Kingdom patrons.

The 46-year-old Welshman unveiled the handiwork, which his beneficiary dubbed “sumptuous,” earlier today in London, adorning the container with his trademark crystal detailing and embellishment. McDonald’s golden arches appear as well, of course, with the overall brainchild resulting from his “fashion creations and iconic embellished rep carpet dresses.” 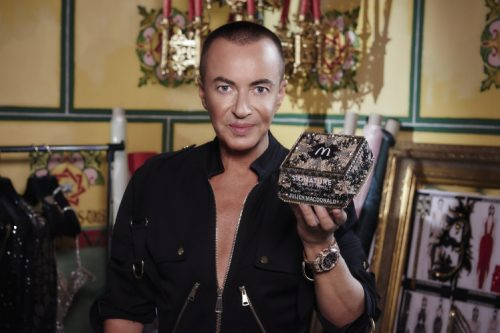 Designer Julien Macdonald is helping McDonald's to be even more popular among its United Kingdom consumers. (Image via McDonald's)

“This was translated into a gold baroque crystal encrusted box, which is the perfect packaging for the luxury McDonald’s Signature Collection burger,” Macdonald said of the work that will eventually help employees enclose, albeit temporarily, BBQ, Classic and Spicy burgers that all include a combination of British and Irish beef.

McDonald’s intends to have the boxes in more than 900 United Kingdom locations by the end of the year, making clear its commitment to touting the 2001 Elle Style Awards British Fashion Designer of the Year’s skillset.

“To partner with such an iconic designer as Julien Macdonald is fantastic, and his beautifully designed star-studded box complements The Signature Collection perfectly,” Emily Somers, McDonald's vice president of marketing, said of the union that could certainly lead to a few head-scratches because of its fusion of a prominent fashion figure with an entity, who, even with a ubiquitous global presence, will always draw criticism for its product line no matter its menu modifications.

While the first 1,000 custom-made boxes will inspire collectors to covet opportunities to attend the 14 regional events that organizers have planned between August 29 and September 15, those with slightly more altruistic interests will also enjoy learning that Macdonald has designed a bejeweled box set for an auction, with proceeds going to the Ronald McDonald House Charities.