McDonald’s Will Phase Out Styrofoam Cups and Packaging

Some New Year’s resolutions require their originators to use the entire calendar to make them realities, yet the completion of such time-consuming endeavors deserves no less praise than the execution of easier aspirations. In fact, the former might merit a bit more recognition because they often involve overcoming conundrums that have long been burdens. McDonald's has decided to become a commercial example of a well-intentioned resolver with a bother to put behind it, as come the end of the year, the world’s largest fast food chain will cease using polystyrene foam packaging at all of its global locations.

The eateries total more than 36,000 spots and help to make the entity a veritable cash cow, with hamburgers obviously giving that title some literal support. Already due for a big 2018 change through its impending headquarters’ relocation from Oak Brook, Illinois to Chicago, the 77-year-old titan will enhance concern for its contributions to consumers’ carbon footprints by making changes that are bound to inspire much happier meals for said patrons. The imminent polystyrene elimination will mark the end of what amounts to 2 percent of McDonald’s packaging, a figure that, though relatively small, presently causes enough damage to prompt As You Sow, a shareholder advocacy group, the call for a revamp. 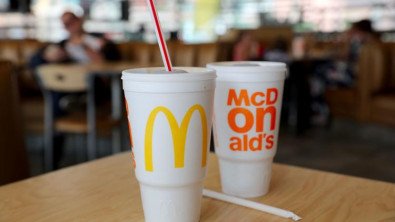 By the end of the year, these foam cups will become things of the past at McDonald's locations. | Credit: Chicago Tribune

“Rarely recycled, expanded polystyrene foam used in beverage cups and takeout containers is a frequent component of beach litter, breaking down into indigestible pellets, which marine animals mistake for food, resulting in deaths of marine animals,” a company release said of the rampant reliance on the packaging option that more than 100 U.S. cities have banned or restricted.

The recent McDonald’s-centric revelation stems from an As-You-Sow-guided May vote through which 32 percent of shareholders pledged allegiance to fighting for foam’s removal. Taking to its website, the fast food provider also vowed to have all of its fiber-based packaging come from certified or recycled resources within the next two years, with the current tally checking in at 64 percent. That digital declaration dovetails with the polystyrene news to move McDonald’s away from controversy it caused in the summer, when, according to the Chicago Tribune, it reintroduced plastic cups—a no-no for its hot beverage offerings since 2012 and an infrequent find in many of its American markets with respect to cold drink containers and food trays—in the Chicago area.

That move, which the publication reported through the help of environmentalists, also extended to other American locations and international dining destinations. The paper noted that McDonald’s has chosen to let its website explain the environmentally-friendly plans, but it did include As You Sow senior vice president Conrad MacKerron’s contention that the chain will announce a packaging and recycling initiative this week.

McDonald’s is definitely not the first mega food and/or beverage company to face backlash for its business procedures with respect to packaging, and it will certainly not be the last, as global audiences call for equal consideration going to how enterprises produce and protect their goods. In other words, the pursuit of the almighty buck should never find one neglecting responsibility to those who hand over that desired commodity.