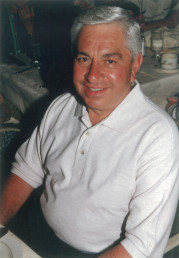 Carollo, who was born in Chicago and served in the U.S. Army, entered the promo products industry in 1963 with Lion Match Corporation of America. He worked his way up through a variety of jobs—shipping clerk, salesman, sales manager, chief operating officer and vice president, and eventually was offered to purchase the company in 1975 when the owner was ready to retire. He was an innovator in the industry, and would take this match company to new heights, and then reinvent the company with hand fans and so much more as the times changed. He believed in a quality product at a fair price, which was evident by winning the Counselor Supplier of the Year in the Fan category numerous times. He was constantly adding new products and buying new companies to remain relevant in the promotional products industry.

In 2014, Counselor named Carollo and Lion Circle the winner of its Supplier Family Business of the Year Award. When he won the award, he stated, “The best part of the business is having all my children working with me. I’ve watched them all grow in different directions, but each of them has something to contribute to the business that’s been such a significant part of my life.”

He truly was a family man who valued everyone’s contribution.

“My dad will continue to direct the business and tell us all the crazy new products we should be developing based on a TV show he saw or an idea he had while walking on the beach in Florida,” his son, Rich, said.

He was always working on the next big thing, great idea or spark of inspiration to bring into the company.

Carollo was an eternal optimist, unpretentious and generous with everyone. He always wanted to be part of the action. He cared about all of his employees, and could always be found working with them on the line, listening to their stories and congratulating them on a job well done.

His wife of 52 years, Therese, and their children Jay, Jack, Jo-Ann and Rich, as well as their spouses and seven grandchildren, survive Carollo. His children will continue to run the day-to-day operations of Lion Circle, with his son Rich taking over the role as president.