Are Men's Rompers the Next Big Summer Trend?

Rompers—they've been a summer staple for women since 2011. And now, it looks like men want in on the casual and breezy trend, too. According to TIME, a company called ACED Design created the RompHim as the male counterpart to the one-piece look.

The RompHim currently is running a Kickstarter campaign, which blew past its $10,000 goal, and is now up to $142,256 pledged. The RompHim team is based in Chicago, and says they are "revolutionizing men's fashion," and tested their looks on guys of "all shapes and sizes to make sure [they] offer something for everyone." 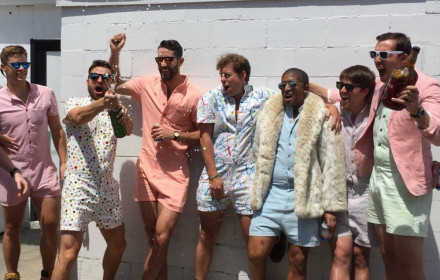 The RompHim features buttoned waist tabs for a more flattering fit, and promises that once users put it on, they won't want to take it off.

In response to the male romper, social media blew up with endless jokes:

Only time will tell whether the male romper will become a summer trend, but keep an eye out for this men's style.