"Stray," an indie video game where you play as a cat traversing a futuristic city with a robot companion (just go with it), generated considerable buzz when it was announced in 2020. That buzz carried over into the game's official launch on consoles and PC this week, with "Stray" racking up play numbers well above those of a typical indie release.

Annapurna Interactive, the game's publisher, came prepared. Alongside the release, the studio announced a pre-order for two pieces of tie-in merch in partnership with Travel Cat, a pet products company. One of the items is a cat harness/leash. The other is a cat carrier backpack complete with a bubble viewport for your feline friend.

we've hinted at it. it's true. we're happy to share that limited edition Stray x Travel Cat merch for your feline companions is up for pre-order! https://t.co/DEu6lnhQTj pic.twitter.com/YmRQVEO0Pe

The airline-approved carrier has a long list of features (including a mesh screen you can swap in for the bubble) and is spacious enough to hold "big boned" cats, per the item description. The harness and the backpack have dual branding featuring both the Travel Cat and "Stray" logos.

Credit to Annapurna for getting ahead of the game here. There's no guarantee any game, much less an indie one, will be a hit big enough to capture attention outside the usual gaming sphere, but "Stray" has done that. Having merchandise at the ready lets Annapurna capitalize on that momentum even more. 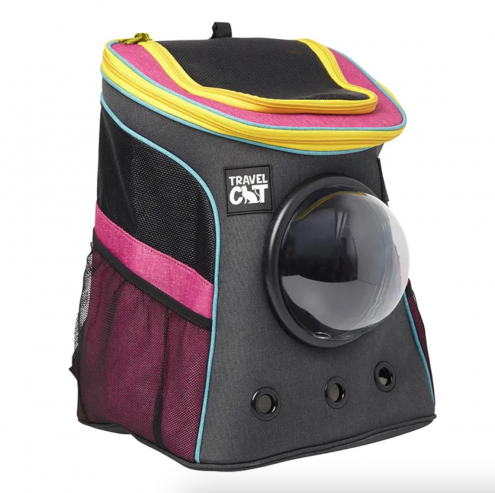 The limited-edition Stray x Travel Cat Backpack has a bubble viewport that swaps out for a mesh screen. | Credit: Travel Cat / Annapurna Interactive

Plus, we've already seen what happens when indie-games-turned-surprise-hits don't have a branded merchandise. InnerSloth, maker of "Among Us," had to scramble to launch a merch store after fans began creating and selling knockoff merchandise following the game's sudden success.

The "Stray" merch is also a reminder that pet products are a great and potentially underutilized opportunity for branding. People love their pets as if they're humans (maybe even more than they love humans!) so items that help pet owners pamper their beloved furballs can get a lot of use and create lots of positive brand interactions.