What Merchandise Is Selling at the Republican National Convention?

Since T-shirts are always a popular branded product, it's no surprise that they are center stage at the RNC. Most of the branding is straightforward and features the official elephant/guitar RNC 2016 logo, according to BuzzFeed. 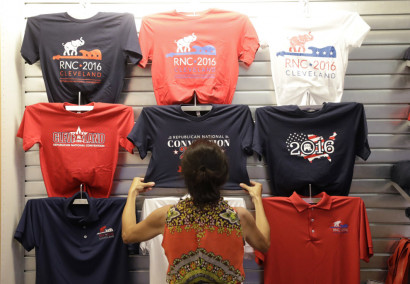 A variety of RNC 2016 T-shirts and polos are available for purchase in Cleveland. (Image via BuzzFeed)

There are also a variety of polo shirts available in red, white and blue.

Capitalizing on Trump's slogan, "Make American Great Again," hats are available in a slew of colors. As BuzzFeed pointed out, most of the merchandise does not feature Trump's running mate, Indiana Gov. Mike Pence.

Buttons are hot-sellers at the RNC. Featuring phrases like, "Obama, you're fired," and "Hot chicks for Trump," the pins and buttons sell three for $10 at various vendor stands.

While pro-Trump merchandise is everywhere, there's another theme running through the RNC: anti-Hillary sentiments. Along with Trump pins, vendors have been selling "Hillary for Prison" shirts and buttons, according to The Daily Dot. To see more anti-Hillary merchandise, check out The Mic.

According to MarketWatch, Trump-themed buttons and anti-Hillary slogans aren't the only features making strides at the RNC. Vendor Juan Valdez is selling a pin saying, "I'm only here for the Pokemon," which is his second best selling button.

There's also a dryer lint sculpture of Trump selling to the highest bidder.