It's no surprise that merchandisers hopped on the latest phrase to come out of this year's presidential election. After Donald Trump referred to opponent Hillary Clinton as a "nasty woman" during the final presidential debate, designers quickly slapped the phrase onto T-shirts and other merchandise.

And, like anything that becomes popular, there always will be copycats. Mike Lin, a Los Angeles-based entrepreneur, filed an application for "Nasty Woman" on behalf of his company, 47 / 72, for online retail items, like clothing, posters, pillows, mugs, bags and electronic cases.

According to The Fashion Law, Lin claimed that others are using the phrase without his permission.

One company, Nasty Gal, which has sold its apparel to celebrities, like Katy Perry and Will Ferrell, could be immune to Lin's criticisms, as the U.S. Patent and Trademark Office claims that "marks [that] convey a similar general meaning and produce the same mental reaction" are defined as similar, so the secondary mark may not be eligible for registration. 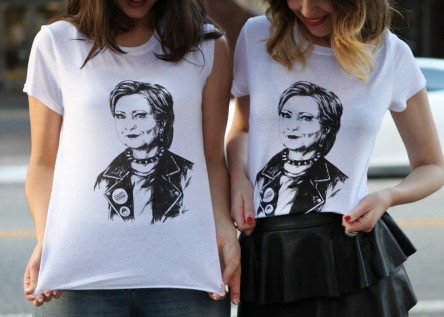 A Los Angeles designer claimed retailers, like Nasty Gal (whose T-shirt is pictured) infringed on his trademark. (Image via The Fashion Law)

Regardless, he claimed that he intends to use the Digital Millennium Copyright Act (DMCA) to fight the alleged copiers.