After the third and final presidential debate on Wednesday night, numerous news outlets and media platforms were discussing the various utterances that stood out from the discussion. To the surprise of no one, merchandisers have capitalized on the memes and buzz by printing phrases, like "nasty woman" and "bad hombres" on apparel and other merchandise.

Cotton Bureau is selling a T-shirt with "Nasty Woman" printed on the front (the item is called the "Nastee"), and plans to donate part of the proceeds to the Hillary Clinton campaign, according to Esquire. 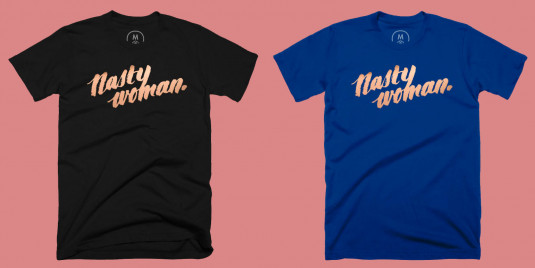 Cotton Bureau is selling "Nasty Woman" shirts and donating a share of the proceeds to the Hillary Clinton campaign. (Image via Esquire)

On big e-commerce sites, like Cafe Press, Red Bubble and Etsy, designers are selling merchandise that say "Nasty Women Against Trump," coffee mugs that say "Bad Hombre" and pillows that mimic the classic "Breaking Bad" title card with "Bad Hombre" in place of the show's title, according to MarketWatch.