3-D printing went from what seemed like an impossible, futuristic idea to a standard practice in a short time. Companies are able to design and print all kinds of things in a matter of minutes. But, as with most developing technology, it still has its flaws and room to grow.

New Atlas is reporting that Desktop Metal, a Massachusetts company, is introducing a 3-D metal printing system that's faster, safer and cheaper than existing systems and could revolutionize mass manufacturing as we know it.

As of now, the most common and affordable 3-D printing materials have been plastics. Big-name manufacturers like Boeing and NASA have been using laser-melted printing, but it's slow and costly.

Destkop Metal, which employs a few MIT professors, has raised hundreds of millions in investments for its promise to make reliable 3-D printing at a fraction of the current cost. One of the investors was Google Ventures, too, which says a lot. 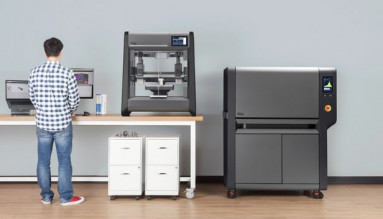 Desktop Metal says that users will be able to produce up to 500 cubic inches of parts per hour. That's 100 times faster than the current methods.

This development will primarily benefit companies like the aforementioned Boeing and NASA, who create parts for aviation machinery en masse, but it could still see trickle-down effects into the promotional products industry, as it could have an effect on manufacturing capabilities overall.

It's worth keeping an eye on, that's for sure.