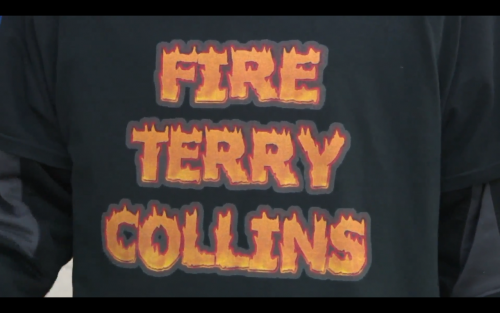 While Scher was wearing the shirt himself, other fans in attendance claimed he was also selling the T-shirts and holding up signs at both the Tuesday and Wednesday night games against the Milwaukee Brewers. Sources also said the man was inebriated and incoherent while attempting to sell the shirts.

“My mother has breast cancer, and I swear on her life that I have never taken a drink, never taken a drug, and I only have one of these T-shirts, so how could I be selling them?” Scher said, according to the New York Post.

Scher attempted to attend Friday's game, but he left because he felt security was making him uncomfortable. He then vowed to never attend another Mets game.

This has many wondering whose testimony is correct. Was Scher kicked out of the game simply for sporting a shirt that called for Collins' firing? Or, did Scher drink a little too much and illegally sell these tees, leading to his forced exit?