Mets Fans Line Up for Hours for Promotional Bobblehead

We've seen some pretty great bobbleheads this year—from this Chicago Cubs giveaway to this Ichiro Suzuki bobblehead. Meanwhile the New York Mets have been hyping up this Marvel x Noah Syndergaard bobblehead for quite some time, and it looks like it was worth the hype. 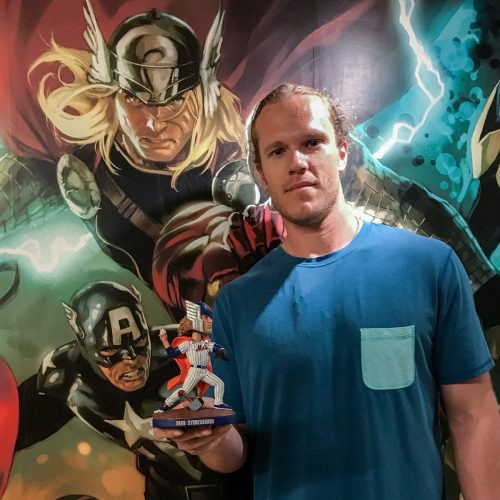 Last Saturday night, thousands of Mets fans showed up hours ahead of the 7:10 p.m. start time in the hopes of nabbing one of the 15,000 coveted Thor/Noah Syndergaard bobbleheads. The Mets Marvel Day giveaway was headed for Asgardian greatness, except for the fact that even securing a spot in line hours ahead of the first pitch was not enough to secure a bobblehead.

As a result, plenty of angry fans took to Twitter to voice their discontent. But the good news is that those who did obtain the giveaway were very pleased with it.

Thank you @Mets and @Marvel for tonight's awesome give away, well worth waiting in that long line👍 #LGM #Thor #Mets pic.twitter.com/3Tneean3fn

With so many bobblehead giveaways popping up for this year's baseball season, it's interesting to see which ones draw fans in droves to the stadium gates. Perhaps the reason for Thor's success is that it's different from the typical player's bobblehead. Not only does it celebrate fan favorite pitcher Noah Syndergaard's flowing blonde locks, but it also ties in with Marvel's hit movie franchise. Because of all this, it's a hit for children and adults, and it's definitely a hot collectible.