Mexico has canceled sugar export permits to the U.S. due to a dispute over shipment speed, which could disrupt the U.S. sugar supply.

In a letter sent by Mexico's sugar chamber on Monday, authorities blamed the cancelation on unfilled positions at the U.S. Department of Commerce, which, in turn, has left no one in Washington, D.C., for Mexican officials to negotiate with.

It's important to note that Mexico is the U.S.'s top foreign supplier of sugar, supplying just about a third of its imported sugar on a yearly basis (a trend that's projected to continue this year). 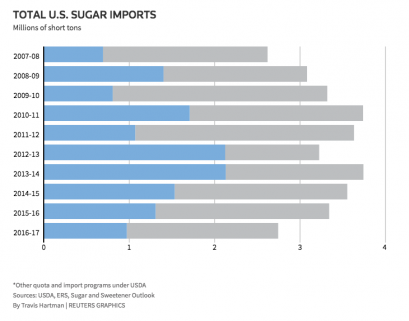 Mexico (in blue) accounts for nearly a third of U.S. sugar imports. (Image via Reuters)

Reuters reported that the letter called U.S. Commerce Department officials' interpretation of a clause in the suspension agreements as "absurd."

The dispute centers on an interpretation of how the Mexican government issues export licenses to ensure supplies enter the United States at a regulated pace.

The U.S. sugar industry late last year pressed the Commerce Department to withdraw from a 2014 trade agreement that sets prices and quota for U.S. imports of Mexican sugar, unless the deal can be renegotiated.

As a result, sugar prices have risen, hitting 41.71 cents per pound on Tuesday, the highest in about five years.

Richard Pasco, president of the Sweetener Users Association trade group, told Reuters that the uncertainty is the biggest problem.

"We need adequate supplies, and the lack of a resolution is a real problem," he said.

We'll continue to monitor this story, and the price of sugar to see if it affects the chocolate and candy businesses of the promotional products industry.