In response to more professional football players joining Colin Kaepernick's protest, some fans have protested the protest, according to Local10. 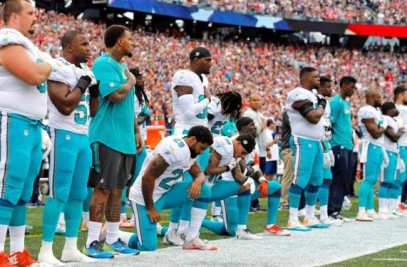 Prior to the Miami Dolphins' game against the New England Patriots on Sunday, players Kenny Stills, Arian Foster, Jelani Jenkins and Michael Thomas kneeled during the national anthem. Some Dolphins fans felt that the four players' protest was out of line and have begun to demonstrate their discontent by burning Dolphins' team merchandise.

Local10 reporter, Derek Shore, tweeted a video of the merchandise in flames:

Some in Davie burn @MiamiDolphins jerseys in response to 4 players taking a knee during the national anthem. pic.twitter.com/xf1ADfaMHA