I can definitely understand and appreciate the benefits of being a bandwagon fan, as though I cheer most fervently for the Philadelphia Phillies and Boston Red Sox, I fully supported the Houston Astros (once they had defeated the Beantown bunch, that is) on their way to the World Series crown. Though they have enjoyed some solid seasons since the 2003 squad finished 11-2 and placed fifth in the final coaches poll, the Miami Hurricanes have struggled to merit much consideration as a championship contender, as they have ended the year as a ranked team only four times since that campaign. However, 2017 has seen the collegiates school their first 10 foes to sit behind only the Alabama Crimson Tide in the polls, and fans of all sorts, including new admirers, are rewarding their renown by storming stores and the internet for merchandise, with the "Turnover Chain" garnering the most acclaim.

The aforementioned item, which Promo Marketing recently addressed as an example of what the LA Times has dubbed “sideline swag,” has helped drive sales up 580 percent versus receipts from this time last year, per a Fanatics-provided report to ESPN. I am a child of the ’80s, so I am well aware of the dominance to which long-tenured supporters are accustomed to seeing from the athletes and can definitely see why so many of them and the out-of-the-woodwork backers would want to celebrate the rejuvenation. With regards to the chain, Miami alumnus D.J. Williams, who went on to play for the Denver Broncos and Chicago Bears, has led the way by peddling a version of the reward for defensive prowess through Dyme Lyfe. 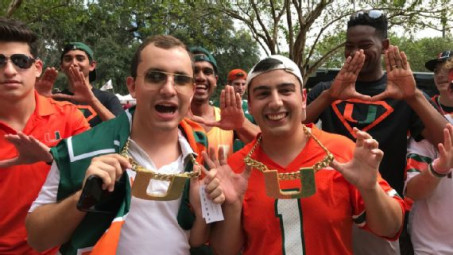 Supporters of the Miami Hurricanes have added bling to their fandom through the Turnover Chain. (Image via ESPN)

Seven hundred of the goodies have already come to adorn fans’ necks, with T-shirts depicting the novelty product also proving a must-have option. Williams kickstarted the craze and five companies, notably Adidas, which is Miami’s official shoe and apparel provider, have joined him in promoting the Atlantic Coast Conference constituent’s feats.

“What really makes the business thrive is the bandwagon fan,” Harry Rothwell, the general manager of the merchandise location All Canes, said. “I see people in the store who I haven’t seen in 15 years. They say they moved or were busy, but they’re here because it feels good again for them.”

Howard Taylor, who serves as group vice president of Follett, which owns All Canes and the university’s campus bookstore, added that no product in the last decade and a half has proven a more appealing purchase than the chain, which, in terms of gaudiness, has no competition from this lowly scribe’s point of view.

The Hurricanes have two tilts remaining, including Dec. 2 conference championships game against Clemson, the defending national titlist. Win that duel, and the club will certainly secure a spot in the College Football Playoff National Championship. Lose it, and they will likely not qualify yet still receive an invitation to a prominent bowl game. Either way, Williams and his peers will probably keep forming links as supporters of all things Miami-related, especially the chain.

No matter the field, “Give them what they want” often rings true as a reliable philosophy. In this case, the football players are providing victories, and businesses are banking on those triumphs by helping fans show their pride. Sometimes, no matter how much of a head-scratcher the marketed products are, the formula is that simple to follow.