Set to celebrate the opening of their 25th anniversary season come April 3, the Miami Marlins, dubbed the Florida Marlins upon their 1993 debut as a National League East Division franchise, have wowed fans and observers through many notable achievements. With a pair of World Series titles, five no-hitters, four Hall of Fame players and Rookie of the Year recipients, and two Manager of the Year winners, they have consistently lured attention as consummate professionals. They have not, however, ever seemed to find a laudable logo, and the quest to do so became fishier recently when the organization announced changes for print and digital applications.

The decision, which Chris Creamer detailed through a piece on sportslogos.net, will not affect the caps and jerseys that star right fielder Giancarlo Stanton and his contemporaries will don. It will, however, strive to be more visually appealing by increasing the size of the “M,” swapping black for white in the interior and ditching “Miami,” the geographic identifier that became apt when the ownership team re-christened the squad ahead of the 2012 season. 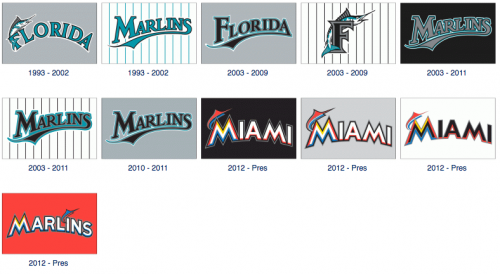 Since their 1993 inception, the Marlins franchise has donned 11 logo variations on its jerseys. (Images via sportslogos.net)

Whether the modifications will make any difference with respect to the team’s performance (the Marlins have had only six winning campaigns and none since 2009) will start to become apparent in just under four weeks when the Marlins launch their march to respectability for Opening Day, against the Washington Nationals. From a marketing point of view, the change might not reel in many lucrative opportunities, with comments on Creamer’s post finding backers and bashers chiming in with equal frequency on what the future holds for the promotion of the color scheme.

The overall plan to tinker with the print and digital representation, though, brings to mind the diverse, although not always revered, identity that the team’s logos have had. Perhaps one can blame the backlash on the fact that fans voted in 1991 for the team to be the Miami Manatees, a decision that then-owner Wayne Huizenga threw back in the ocean, or maybe the flack stems from frustration with overseers’ failure to produce a consistent winner. But no matter the culprit, fans have not seen the emblems as a great catch. Would they trade dissatisfaction with the hues for a huge shot at fielding a contender again? Here’s to supposing that would hook them.