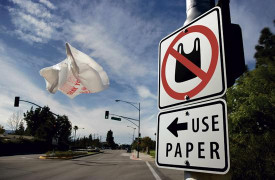 With states, and even some countries, taking measures to ban plastic bags, Michigan has gone an entirely different route. Instead of banning plastic bags, the state government is trying to ban actual bag bans, according to The Detroit News.

Republican lawmakers and grocery store owners are working together to prevent plastic bag fees in the state of Michigan. Back in May, the Senate approved legislation that would stop local governments from adopting the bans of plastic bags. Last week, a House panel approved the bill.

So far, Washtenaw County is the only government in Michigan to pass the plastic bag fee, but the fee has not been enforced yet.

Democratic lawmakers and environmental activists, on the other hand, believe that communities should be able to make the decision themselves.

This year, plastic bag bans have been gaining traction all over the world. Both New York City and Cambridge, Mass., passed anti-plastic bag legislation this year. Meanwhile, France just became the first country to ban disposable plastic cups and plates. It's interesting to see Michigan take the opposite stance on its plastic bag legislation.