The COVID-19 pandemic has, at some point or another, left most of us with unexpected blocks of time to fill, making games a go-to source of enjoyment. We have not caved to the power of Microsoft Solitaire yet, but many have, with 100 million hands played daily around the globe, according to Microsoft. In honor of the game's 30th anniversary, the company is releasing branded merch that, while minimal, is a nice celebratory use of promotional products. 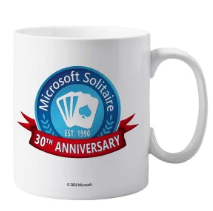 This 100 percent ceramic mug is one of two items that Microsoft Solitaire aficionados can purchase. | Credit: Microsoft

Friday marked the big occasion for Microsoft Solitaire, with National Solitaire Day leading the issuing company to tout the history of its creation, including 2019 induction into the Video Game Hall of Fame. While we commend the overseers for having their announcement include a call to have players set a record for most games played in one day, the merch certainly appeals to us more.

Through a $14.99 mug and a $24.99 T-shirt, fun will definitely be in the cards for end-users who are looking to declare their connection to the game. Since Microsoft has long sought to increase interest in its amenities, including through promo boxes that went to attendees of its May 19-20 virtual conference, the apparel and drinkware items figure to fare well among consumers, with our suspicion being that the shirt will do pretty well now that warmer weather will be trying its best to help us shake off the doldrums that we have accumulated this spring.

To 30 years of hiding what you were actually doing on your computer. Happy birthday Microsoft Solitaire pic.twitter.com/PKQ0BV14oD

As we noted what seems like an eternity ago, Microsoft always appears eager to expand its holdings and gain appreciation for its products and services. Seizing upon the opportunity to mark its solitaire creation’s anniversary, then, gives it another chance to see just how much its offerings suit the general public’s interest. At a time like this, when people are seeking many means to try to lessen the severity of what the pandemic has caused, it would not strike us to learn if the people who have made Microsoft Solitaire so popular give the associated merch a fair deal.