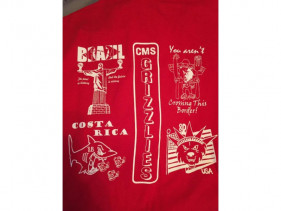 The principal of a Georgia middle school decided to scrap this design for a T-shirt after parents complained. (Image via Canton-Sixes Patch)

The principal of a Canton, Ga., middle school has decided to scrap the school's T-shirt for its upcoming Field Day activities after some parents complained that it was offensive.

According to Canton-Sixes Patch, eighth-grade students at Creekland Middle School were allowed to design mascots for each of their Field Day teams—Brazil, Costa Rica, Mexico and the U.S. The Mexico team designed a logo depicting a grizzly bear—Creekland's mascot—wearing a sombrero and serape with the message, "You aren't crossing this border!"

Dr. Deborah Wiseman, principal at Creekland Middle School, sent a letter home to parents addressing the complaints, and assuring parents that the school would choose a new design.

"We know that neither the students nor the teachers meant any harm by the design, but it has inadvertently upset some families," Wiseman said in the email.

Wiseman also requested parents return the old shirt for a replacement, which the school will give the children at no additional cost.

"We remain diligent in our efforts to provide a welcoming school environment for all of our students, families and staff," Wiseman said, according to Canton-Sixes Patch. "Thank you for entrusting your students to us every day. It is an honor to serve this community and we take that honor very seriously."