Whenever Bob Uecker walks away from serving as the Milwaukee Brewers’ radio play-by-play announcer, he will leave the broadcast booth with much to be proud of, including his “Mr. Baseball” nickname,” an eponymous monument outside the club’s Miller Park, the 2003 Ford C. Frick Award and unforgettable turns in the “Major League” movie trilogy. Fully aware that it is employing an icon, the franchise decided in 2016 to commemorate his tenure, which will reach 47 years come the 2018 campaign, with a talking alarm clock and will again capture the colorful character’s voice next season through a bottle opener giveaway. 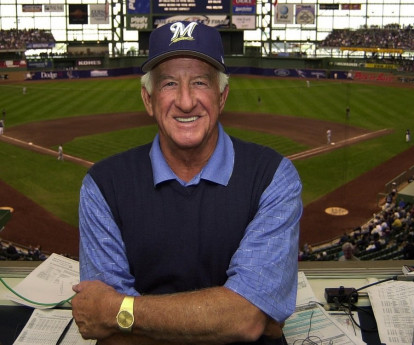 Bob Uecker has served as the Brewers' radio play-by-play announcer since 1971. (Image via shepherd express.com)

No matter how well a team fares, owners are always looking to craft promotional ideas to draw nice crowds, and the powers that be behind the Brew Crew, who have registered only 17 winning seasons and a pair of .500 runs since their 1969 inception as the Seattle Pilots, have definitely realized that honoring a legend might not help their charges to claim the National League Central title but will inspire a few “Let’s go to today’s game” utterances. The organization will distribute the beverage aid Aug. 5 when the Colorado Rockies, another team associated with beer due to their playing at Coors Field, face off against the hosts at 2:10. All fans will receive the nod to Uecker, a Milwaukee native who played for the city’s Braves, now based in Atlanta, as a part of the summer afternoon occasion. The day will mark the longevity of the 83-year-old not only as an announcer but also as a source of joy for the mostly long-suffering base.

While no images of the keepsake item are available, it will no doubt impress attendees’ ears if not their eyes, as it will include numerous sayings that have helped Uecker to gain renown as a chronicler of America’s pastime. Some of these zingers might be a little lengthy, but here’s hoping a few of them end up rending the air. Milwaukee is “juuust a bit outside” of Promo Marketing’s Philadelphia environs, but for a chance to sample Miller Park’s ballyhooed concessions and to crack open a cold one with Uecker encouraging us, we might have to hop on a plane to improve the Brewers’ bravado.

Sponsor Content This Quiz Will Tell You What Your Ora Is!
Comments
The Top Lists