We don't have to tell you that television product placement can be a big boost for a business, but it might be surprising just how influential a brief product spot can be. Such is the case for The Science Museum of Minnesota, which saw a major uptick in branded apparel purchases from its gift shop and web store after "Stranger Things" used its branding for Dustin's vintage sweatshirt. 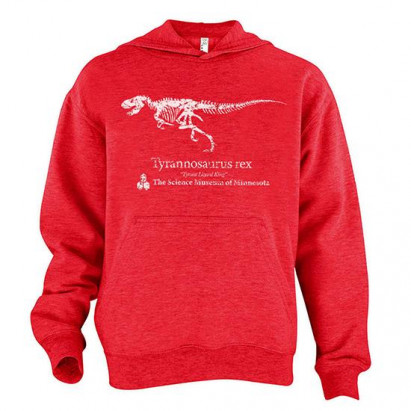 Credit: The Science Museum of Minnesota

If you recall, the museum responded by marketing the hoodie and making the vintage Thunder Lizard hoodie available for purchase. And now we know the impact of the sweatshirt's Netflix cameo. CBS Local is reporting that 40,000 apparel items have been sold since the museum made the products available for purchase. The proceeds from the sweatshirt are put right back into the museum's education outreach programs, so the positive impact just keeps on spreading.

In an effort to keep the ball rolling, the museum just released a new line of similar merchandise, and we have no doubt the looks will be hot sellers. The new collection features new dinosaurs and new colorways for "Stranger Things" fans and future paleontologists alike.

There are onesies, hoodies, jersey tees and raglans—and prices range from $15 to $45.

The museum could have just tweeted out a thank you to the show for its product spot, but it did the smart thing and created a line of merchandise around the costuming choice. Now, we know it's not exactly easy to get a shoutout on a major television series, but drawing inspiration from popular television series can be just as lucrative. At the very least, it shows how powerful and effective branded merchandise can be.