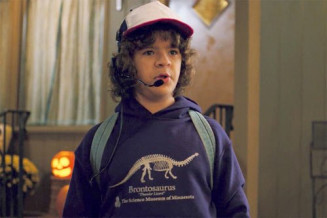 The Science Museum of Minnesota has become a haven for fans of "Stranger Things." (Image via Twitter)

I must admit that I have yet to watch an episode of “Stranger Things,” but, based on the buzz that the Netflix show has generated, I intend to rectify that oversight quite soon. Whenever I join colleague Brendan Menapace in enjoying the first two seasons, I will also become a friend, albeit a distant one, to Minnesota residents who took to their state’s titular science museum yesterday to purchase apparel items inspired by the show’s inclusion of a dinosaur hoodie that the destination originally hawked more than three decades ago.

The program has proven a ratings hit and yet another entry into a list of shows, such as "The Goldbergs,” that draws on nostalgia to accentuate its identity, with the inaugural season set in November 1983 and the follow-up, which Netflix released Oct. 27, occurring a year later. Having already collected numerous accolades for its plot lines, “Stranger Things” recently fetched praise from those with apparel on their brains, as actor Gaten Matarazzo’s character, Dustin Henderson, donned the aforementioned hoodie this season, generating immense interest in the brontosaurus skeleton-bearing item that the museum sold when hosting a traveling exhibit at its old haunt. Quick to consider means to enhance their mission to “inspire learning, inform policy and improve lives,” the site’s overseers ended the hoodie’s existence as a figurative fossil and connected with Netflix, which had become aware of the design through the show’s costume designer, Kim Wilcox, to replicate the goodie.

Now, plenty of supposedly wonderful ideas come and go without creating much fanfare, but the decision to acknowledge the shirt’s pull is definitely going to keep the haven captivating North Star inhabitants and tourists for a long time, as yesterday’s sales totaled more than $400,000. Think about that staggering figure. If it makes you nod or smile, well, you could be reacting that way because you, too, are a fan of the interesting events that transpire in the fictional town of Hawkins, Indiana, but you could also be impressed because the collaboration is an undeniable example of marketing know-how.

What a day! Thank you for helping the Science Museum take the next generation of Dustins on some amazing curiosity voyages. pic.twitter.com/VtuoWLMU3m

Yes, the museum could have simply acknowledged the outpouring of affection for the item by giving the somber news that it is discontinued, but it chose the wiser option of seeking to market the desired hoodie, which it will be receiving another shipment of today, thus making an ally in Netflix, drawing throngs to its space and attracting new newsletter subscribers. That is a win-win-win situation that won’t soon go the way of the brontosaurus and its reptile pals.