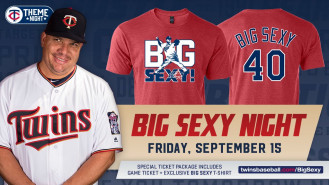 Sluggers and flame-throwing hurlers will always compel crowds to head to major league ballparks, but baseball also needs a fair share of characters to keep its reputation as America’s pastime. While his right arm has generated considerable press in helping him amass 239 wins over nearly 20 big league seasons, Bartolo Colon might have acquired more fame among fans for his portly frame, which led his then-New York Mets teammates to dub him “Big Sexy” in 2015. On Friday, the Minnesota Twins, who have employed the 5-foot-11, 285-pound pitcher for just a little more than two months, will show their affection for his weighty contributions to their roster by giving select ticket purchasers a T-shirt bearing his humorous nickname.

Pittsburgh Pirates legend Roberto Clemente noted, “Baseball has been very good to me,” and if Colon were looking to give his own take on how his occupation has benefited his existence, the 44-year-old might quip that the game has been highly helpful to his waistline, as the Twins, who hold a one-game edge over the Los Angeles Angels for the American League’s second wild-card spot, are the 10th club to send him to the mound. The Dominican Republic product has tallied a 4-4 record for the AL Central club since his 2017 began with a wretched stint as an Atlanta Brave and took the loss yesterday in its series finale against the Kansas City Royals. The team has off today, meaning Colon will not likely head to the hill again until Saturday, but here’s hoping management sends the ageless wonder to face the Toronto Blue Jays a day early.

In promoting the garment that is available through a special package, the Twins have the 2005 Cy Young Award winner sporting a sheepish smile. While it is definitely not the “come hither” expression that many folks might associate with the word “sexy,” it will surely draw a few laughs, and perhaps the levity will help his contemporaries continue their postseason quest pressure-free. Colon has enjoyed carrying the comedic sobriquet, even going so far as to seek to trademark it for an apparel line (hey, he can’t pitch THAT much longer, after all), and one account of the promotional product has joined in on the fun by noting that sizes go all the way up to XXL. I highly doubt that even that option could accommodate Colon, but the big man will no doubt enjoy seeing the athletic romance unfold on a late summer night.

This season has featured ups and downs for the league’s oldest active player, as he will register his first losing season since 2011 yet can also boast of becoming the 18th pitcher to defeat every MLB team and of picking up a complete game victory over the Texas Rangers August 4, a feat that made him the oldest American Leaguer to go the distance and tally the win since 45-year-old Hall of Famer Nolan Ryan did so 25 years ago.

Come Friday, Colon’s charm will definitely influence Target Field patrons to plunk down extra cash for his number-40-bearing top. What a visual it would make if he were to make those same stitches test their breaking point!