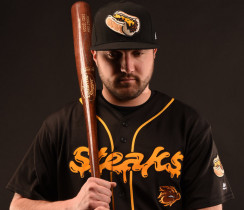 The Lehigh Valley IronPigs, the Phillies Triple-A team, are taking a promotional page from the Fresno Grizzlies, according to Lehigh Valley Live.

The greater Philadelphia area has long been obsessed with its namesake sandwich, the Philadelphia cheesesteak, and the IronPigs are hoping their salute to the iconic sandwich will bring the fans to the stadium.

On June 10, the IronPigs will change their name to the Lehigh Valley Cheesesteaks. The promotional event will feature the team decked out in black jerseys with "Steaks" written across the front.

Fans will vote on the hats to be worn during the game—they will either a cheesesteak "wit" or "witout" onions, a classic dilemma for Philadelphians.

"I think once and for all, we're going to settle the argument in this region about what's the best way to have a cheesesteak," said Kurt Landes, IronPigs president and general manager. Fans can vote at lvcheesesteaks.com, through the Uber app or on social media.

Fans can purchase the Cheesesteaks replica jerseys, and the actual game-worn jerseys will be auctioned with proceeds going to IronPigs charities.

As for the reasoning behind the theme night, Landes explained it's all about the history.

"We ended up focusing a lot on cheesesteaks because I think that's the most iconic Philly name nationally," said Landes. "Everyone thinks about the Philly cheesesteak. We had so much fun developing the concept and idea that it turned into logos [and] merchandise, and there's so many arguments, even among our staff, as far as what's the best way to have a cheesesteak."