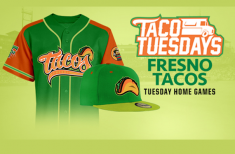 The Fresno Grizzlies Triple-A baseball team tried something different during the season last year—they played one game as the Fresno Tacos. According to SportsLogos.net, the team sported Taco-themed uniforms to celebrate the team's annual Taco Truck Throwdown tradition, and they instantly became a fan favorite.

Now, the team is capitalizing on the Fresno Tacos' success by sporting the promotional gear during its 10 Tuesday home games in 2016.

This shift has led fans to wonder if the Grizzlies are moving toward a legitimate name change.

"Last season, there was some speculation that we might become the Fresno Tacos permanently, but to be sure, we're prouder than ever of the Fresno Grizzlies," said Derek Franks, Grizzlies general manager, on the team's website. "Coming off our first Pacific Coast League and Triple-A National Championship in franchise history, Growlifornia Republic is alive and growing. But we saw how special the Fresno Tacos were to our fans for just one night, and there's no harm in multiplying that pride times 10 this season."

Each Taco Tuesday game will feature a different taco truck, and the team plans to reveal a new mascot, Tito the Taco, for Taco Tuesdays.