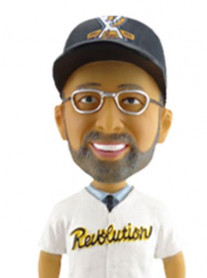 While most sports teams have showcased bobblehead lineups featuring famed athletes from the past and present, the York Revolution minor league baseball team has taken a different route for its 10th anniversary bobbleheads.

According to the York Daily Record, at each Friday home game, the York Revolution will give the first 1,500 fans in attendance a bobblehead of a famous York County personality as part of the Revolution's "Celebrate York" giveaway series.

Not only are the characters themselves distinctive, but the design of the individual bobbleheads also is noteworthy.  The DownTown mascot will have its own 10th anniversary bobblehead doll with a special anniversary jersey, and the Voni Grimes bobblehead, is a combination music box that plays "Take Me Out to the Ballgame," Grimes' rendition of the song.

The York Revolution also will give away 10th anniversary commemorative T-shirts presented by the law firm of Dale E. Anstine.