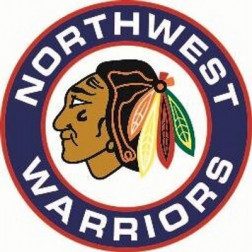 The Northwest Warriors will eventually do away with the depiction of an Indigenous person as their logo. (Image via Twitter)

The Shakespearean canon contains many lines that will likely continue to inspire layered conversations long after those presently populating the planet have shuffled off their mortal coils. Juliet’s “What’s in a name?” inquiry will probably enjoy additional longevity come that distant date because it has already proven significant as people ponder how to address others without mislabeling, offending or inciting them. Athletic teams have become some of the most notable instigators, but one Calgary-based hockey team has looked to make amends by announcing plans to modify its logo, an emblem that bears a striking resemblance to that of the Chicago Blackhawks.

Two weeks ago, a 7-year-old girl with Indigenous ancestry, in opposing the use of a First Nations individual donning feathers on a Nothwest Warriors jersey, learned she could not compete for another club due to geographic restrictions. Her situation, according to president Bryan Boechler, marked the inaugural instance that the Crowchild Hockey Association had received backlash over the artistic depiction. Nothing he had spoken about the logo with local Indigenous figures in the Alberta area before its implementation, he initially declared he and his peers would not change the identifier, but, as of Friday, the overseers intend to remove the depiction from the list of sports symbols that draw cultural ire.

The turnabout stems from talks with Tsuut’ina Nation chief Lee Crowchild, whose surname inspired not only the association’s name but also the title of the arena where Calgary residents engage in public skating and multiple teams compete. Because of that, it can strike one as odd that nobody before the aforementioned girl and her family had cited the Warriors’ logo as discriminatory, especially given the sensitivity of the matter, but there is no time like the present for discussions on misappropriating images for financial gain.

Boechler took to the Warriors’ website on Friday to talk about the altered attitude toward doing away with the insignia, noting that growing concern over their representation made it mandatory for him and his colleagues to consider a more reverent means to identity the performers.

“The process has already begun and we look forward to working with Tsuut’ina to develop updated imagery honouring Chief David Crowchild while considerate of our members and the communities we serve,” the homepage states, adding that “likely over three years,” replacement jerseys will look to make amends, though faster implementation could occur if they craft a plan that will not place “undue financial hardship on our membership.”

As for the child at the center of the controversy, no source has yet mentioned what, if anything, anyone can do for her this season. It certainly sounds unfair that sticking to her morals, while securing future ease for others with gripes about the logo, will presumably keep her from playing hockey until at least this time next year. Along with her matter, one should consider where the Blackhawks fit in the overall picture. Though the Windy City occupants had a very rough spell at the turn of the century, missing the playoffs seven times in an eight-year span, they have risen to prominence and have claimed three Stanley Cup titles since 2010. In other words, their logo, because of their success and the movement toward ridding the sports world of depictions that portray Indigenous folks as brutes and savages, should presumably be making more headlines. It has not escaped the public’s eye completely, but for every call to modify the logo and team name, there are likely 100 cries to address the signifiers and nicknames of the Cleveland Indians, Washington Redskins, Atlanta Braves and others.

What effect, then, will the Northwest Warriors’ decision have on the reigning Western Conference Central Division champions’ identifier? After Juliet asks what’s in a name when considering her attraction to Romeo, she says, “That which we call a rose/By any other name would smell as sweet.” It stands to reason that by any other title, the Blackhawks would play just as well, but will suppositions outduel the almighty dollar as the hockey heroes prepare for this season and beyond, or will petitions for change continue to end up being put on ice?

Cory Cissell Promoted to VP of Marketing at Cap America