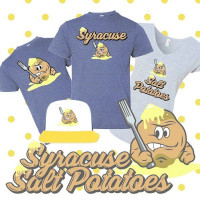 The best part of this logo is the muscular, anthropomorphized potato. | Credit: Syracuse.com

Look, can we just all agree that Minor League Baseball teams are the best at promotions? Not only do most of them have creative names already (looking at you, Mud Hens), but a lot of them do special promotional events where they change their names (and their jerseys) to something representative of their location.

The Salt Potatoes donned special uniforms for "What-if Night" on Aug. 5, celebrating a time where the team asked fans what they would rename the team if they could.

For those unfamiliar with the culinary traditions of New York State, salt potatoes were a common snack for Irish immigrants working as salt miners in the area in the 19th century, according to Syracuse.com.

Here's what makes the whole thing great on a promotional level: The players aren't the only ones who got to live the Syracuse Salt Potatoes dream for the night. The first 1,000 fans received a special replica jersey.

This isn't to say that that the majors aren't creating a ton of fun promotions. They are. But there's just something about the geo-centric pride and silliness of Minor League ball that makes it so much fun.

(Editor's note: I'll be writing to my hometown team, the Harrisburg Senators, to rename the team based on a Central Pennsylvania food staple: scrapple.)