Yankees or Mets? For New Yorkers (and some New Jersey folks, too), the debate will rage on forever. Today marks the two teams' 189th meeting in the historic Subway Series. To commemorate the occasion, Mitchell & Ness, Philadelphia, mapped out which team is winning in terms of merchandise it has sold in New York City's various neighborhoods.

The results showed that the city is just about split in half. If you include Long Island, the Yankees won with 51 percent. Disregarding Long Island, however, the Mets won with 50.5 percent of sales in the five boroughs. 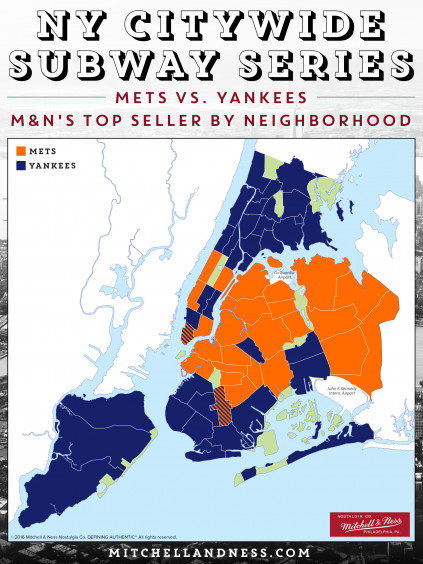 According to Mitchell & Ness, the information is based on online sales from 2014 and 2015. For some areas, the results were predictable. Northwest Queens (home of the Mets' Citi Field) was orange, and the South Bronx (home of Yankee Stadium) was blue. But, certain areas were more disputed, like Central Brooklyn and Lower Manhattan, where the results ended in a tie.

For the Yankees, the biggest fans were in Inwood and Washington Heights. For the Mets, the biggest merchandise buyers were in Greenpoint and Northwest Brooklyn.

This not only is a fun way to fuel the crosstown rivalry in the Big Apple, it's a smart way for merchandisers to know where they could get the biggest business—down to the neighborhood.