Last season, the Cleveland Indians announced that they were downgrading the controversial Chief Wahoo logo in favor of a new, less offensive block "C" logo. However, the Chief Wahoo logo still had a place on the uniforms. The Indians even wore the logo on their hats on opening day this year.

So, opposition to the logo is still running strong from activist groups. And now, MLB commissioner Rob Manfred is joining the fight against Chief Wahoo. 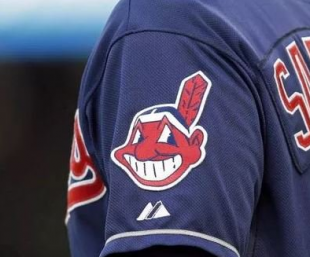 There has been vocal opposition to the Chief Wahoo logo, including protests before games. (Image via Twitter)

According to The New York Times, Manfred discussed his "desire to transition away from the Chief Wahoo logo" with the Indians ownership.

"We have specific steps in an identified process and are making progress," a spokesperson for Manfred said. "We are confident that a positive resolution will be reached that will be good for the game and the club."

Indians fans have claimed in the past that the logo is simply a tradition for their team, and is not meant to degrade Native Americans. But, with their successful season last year, the relatively small-market team has gained more attention on the national stage.

ESPN analyst Bomani Jones went as far as wearing a shirt mocking the logo that said "Caucasians" on the air.

Philip Yenyo, executive director of the American Indian Movement of Ohio, told The New York Times that, while protesting the logo before opening day, one Indians fan yelled, "It's a caricature. Get over it."

This brings into debate the very practice of ethnically-based caricatures in sports. When are they OK? What makes them OK? Is the Indians logo really that bad?

To draw attention to the level of offense Chief Wahoo brings, the National Congress of American Indians made two mock-up hats that stereotype ethic groups in the U.S. in a similar fashion. It's arguable that the fake hats are downright awful. And Chief Wahoo pretty much fits right in. 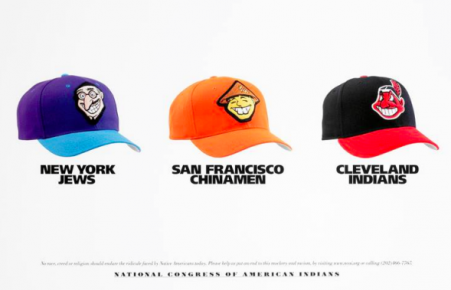 It was Mark Shapiro, former president of baseball operations for the Indians and now with the Blue Jays, who made the call to do away with Chief Wahoo. During the Indians' postseason berth last year, Shapiro again voiced his repulsion.

"I think there will be a day, whenever that is, that the people that are making decisions here decide that Chief Wahoo is no longer fitting," he said.

It got so far that, while the Indians played the Blue Jays in the American League Championship Series, one Canadian citizen filed an injunction to forbid the Indians from wearing the logo when they played in Toronto. The MLB opposed it along with the team, but did say it was open to dialogue about the logo.

"We certainly understand the sensitivities of the logo, those who find it insensitive and also those fans who have a longstanding attachment to its place in the history of the team," said Bob DiBlasio, Indians senior vice president for public affairs.

But, with added pressure from Manfred, Chief Wahoo might finally see the retirement so many have been calling for for years.