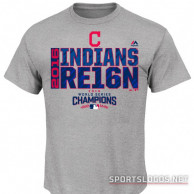 The MLB will destroy this year's leftover World Series merchandise, rather than donate it, which it typically did in the past. (Image via SportsLogos.net)

Last week, we looked into the leftover Cleveland Indians merchandise that won't hit stores following the team's World Series loss. Ordinarily, we could assume the apparel falsely crowning the game's loser would go to charity. Well, this year we would have been wrong.

The MLB typically gave falsely labeled merchandise to World Vision, a nonprofit that fights poverty worldwide. But, this year, the league is destroying the merchandise instead, The Huffington Post reported.

"In past years we have used World Vision, but we have moved our policy to destroying the merchandise," MLB's Matt Bourne told The Huffington Post. "The reason is to protect the team from inaccurate merchandise being available or visible in the general marketplace."

While this seems like it would be wasteful, it makes sense. In September, The Huffington Post reported that certain East African countries, such as Kenya, Uganda, Tanzania, Burundi and Rwanda, wanted to ban imports from Western nonprofits, as the huge amount of imports puts a huge strain on the local clothing industries. This causes the countries to rely too heavily on Western countries.

Jim Fischerkeller, a spokesperson for World Vision, told The Huffington Post that the nonprofit only donates new clothing to places where they see a need and that products aren't available otherwise.

"The apparel items that we send have all been requested by our staff in the field as part of a larger relief and development strategy," he told The Huffington Post. "Fulfilling the basic need for clothing enables vital resources to be directed towards other life essentials, such as clean water, health services and education."

MLB did not disclose how it would destroy the T-shirts.