We often hear that numbers don’t lie, and Major League Baseball (MLB), through its adoration of sabermetrics, is looking to pound home that point more profoundly. If we were to look at his figures even casually, we could see that Jackie Robinson would serve as support for those whose allegiance lies with statistics as the best indicator of greatness, as he helped the Brooklyn Dodgers dominate the National League in his 10-year career, tallying a .311 batting average, scoring 947 runs, knocking in 734 scores and swiping 197 bases. 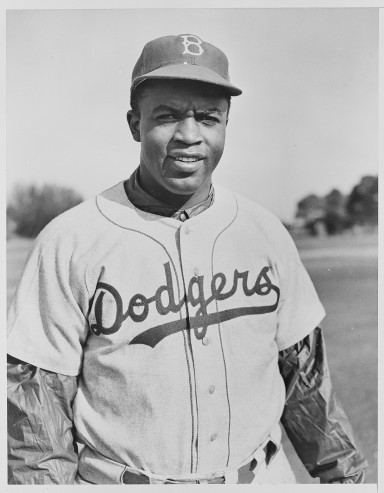 Jackie Robinson became a first-ballot Hall of Fame inductee thanks to an amazing career with the Brooklyn Dodgers. | Credit: Wikimedia Commons

While it is easy to laud him as a hero for those totals, he deserves more regards for that which we cannot count, namely, the insults he received for having broken baseball’s color barrier. Since 2004, MLB has celebrated April 15 as Jackie Robinson Day to honor his example as a civil rights activist and pioneer, but this year’s observance saw some of our national pastime’s fans balk over a commemorative cap that features the controversial Chief Wahoo logo.

The Cleveland Indians will cease to call on the emblem at the conclusion of this campaign, as many opponents have long seen it as an offensive portrayal of Native Americans. In deciding to make 2018 the symbol’s last hurrah for inclusion on jerseys and stadium signs, the franchise has won praise from long-suffering critics, but it has also enhanced the frustration of other advocates who feel the organization will look to make as much money as it can this year on products that depict the caricature. Thanks to the hat that had been going for $37.99 on MLB’s merchandise website, it appears the irked individuals have solid proof of what they perceive as a money-grab strategy.

With Robinson still registering as an influence on societal awareness more than 45 years after his death—and with the headwear item including a logo that, though loved by many, is loathed by others—the issuing of the cap drew immediate attention ahead of the Hall of Famer’s eponymous day. Notified of the product’s existence, MLB removed the good from its shop, although USA Today said that consumers could still secure a Jackie Robinson Day jersey bearing the emblem. Promo Marketing found women’s and men’s tops designated to honor Robinson’s legacy, but neither appeared to have the logo.

SB Nation took the Indians to task through a piece dubbed “MLB Celebrated Jackie Robinson Day by Profiting Off Racism,” stating that by retaining the symbol for one more year, they and their overseers encouraged a you-have-to-buy-while-you-still-can mentality, with the in-question hat certainly destined for revered status among collectors. Though, per Forbes, MLB said the hat was a mistake that had somehow "slipped through the cracks."

No matter where one stands on the Chief Wahoo matter, the designation of the logo as offensive is widespread, and its foes’ unwavering stance on its hurtfulness—combined with the decision to abandon the emblem after this season and the reverence that Robinson has reaped—makes the cap a solid lesson on the perils of adopting a what-have-you approach to business. For the opposition and admirers of Robinson, this incident will further their belief that Chief Wahoo cannot disappear fast enough, and shows that no matter how much respect the ballplayer has earned, nobody seems immune to facing commercialism’s less-than-stellar elements.