Many Americans definitely endured a wicked winter, with frigid temperatures and ample precipitation leading to numerous inconveniences, including irksome infections. Now that spring has arrived, many maladies will end up yielding to the best affliction that has ever existed, baseball fever, as we are only three days away from having the 30 clubs that comprise Major League Baseball (MLB) take to the field. The hold that fans have on the sport has designated the game as “America’s pastime,” leading owners to engage in what has become another treasured pursuit—namely, the distribution of promotional items. This year’s diamond duels will do their part to captivate crowds, with a respectable total of 801 giveaways further compelling the masses to take themselves to a ballgame.

While MLB teams hope that their athletic hires will draw impressive attendance figures, they know supplements will always serve to entice end-users to make a spring or summer sojourn to a park. It often seems, interestingly, that the consideration that goes toward choosing promotional products outweighs the attention that bigwigs devote to pondering who will don a franchise’s uniform. Gentle ribbing of non-contenders aside, I must say that teams are employing creative individuals to conceive of and implement promotions, with it being an honor to have inspected, via internet searches, what the squads will distribute this campaign. 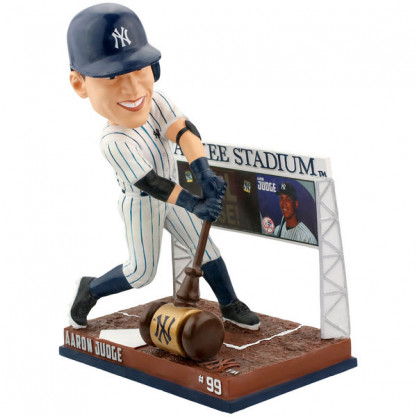 Bobbleheads, like this 2017 one of New York Yankees star Aaron Judge, will be prominent presences at ballparks this season. | Credit: MLB Shop

Forbes tackled the attendance incentives by relaying a Custom Ink analysis of the items, which found each National League team would provide an average of 28.07 freebies, compared to 25.33 apiece for American League squads. Given that Promo Marketing’s favorite bunch of fastball bashers, the Philadelphia Phillies, play in the NL, I liked scoping that detail and enjoyed placing the hometown heroes in my starting lineup of top promotions providers for the 2018 season.

In fact, I am going to have the Fightins’ lead off, as their Odubel Herrara Emoji Cap, set to adorn the heads of fans 14 and under come April 22, both captures the zeitgeist of nonstop social media use and aligns the Phillies, yet again, with the Tasty Baking Company, whose products have kept Philadelphians’ sweet tooths content for 104 years. If you have never tried a Tasty product, frankly, we do not wish to know you anymore. We are jesting with that one, but we do question your taste buds if that is the case.

Since the Los Angeles Dodgers came this close to winning the World Series last year, I am batting them second not only for their great run but also for the reverence that the Californians are showing on Friday to Kirk Gibson. The 1988 NL most valuable player is serving as the inspiration for a bobblehead that commemorates his blast in that year’s World Series opener, with the franchise not only helping fans to relive the home run but also contributing to an eponymous foundation that raises funds to combat Parkinson’s disease, which Gibson has fought since 2015.

Bobbleheads like the one honoring Gibson lead the promotional MLB giveaways list, as 110 commemoratives will add to fans’ experience of seeing their heroes round the bases. The third-through-fifth spots in my lineup go to offerings from the Minnesota Twins, Baltimore Orioles and Houston Astros. On June 1, the Twins are immortalizing outfielder Max Kepler, known for his defensive prowess, with a Nothing Falls but Raindrops figure that shows him making one of his run-saving catches. The O’s have employed Buck Showalter as their manager since 2010 and will show their love of wordplay on June 25 by distributing a “Snow”-alter snow globe. With exactly six months to go between the distribution and Santa’s journey across the globe, it seems the team is definitely dreaming of a white Christmas. To the victor go the spoils, and the Astros, the reigning World Series champs, will honor the Fall Classic’s MVP, George Springer, with a bobblehead April 14, with the product to feature him holding the World Series trophy.

While we have certainly come to expect hats and bobbleheads to dominate promotional plans, teams cannot go to those respective wells the whole season, and the remaining four parts of this lineup show that novelty often makes for a great campaign. The Detroit Tigers are likely headed for a rough season, but perhaps they can look to their past for inspiration on Aug. 12 and 26 when they give out replica jerseys in honor of Hall of Famers Jack Morris and Alan Trammell. It’s a good thing that the New York Yankees and Boston Red Sox are many pundits’ picks to win the American League East crown, as neither would win any consideration as a particularly giving franchise based on this year’s promotional products breakdown. The former ranks 23rd with 20 freebies and the latter checks in at 27th with 15 giveaways. The Red Sox, though, could grow on a few more fans come May 14, as they will give out a Growing Beard Plant to honor closer Craig Kimbrel’s facial hair.

The Beantown club lost the 1967 World Series to the St. Louis Cardinals, who repeated as champs the next season. On May 18, to commemorate the second title run’s 50th anniversary, the Cards will offer a Bob Gibson Pitching Rubber that pays tribute to their ace’s amazing Cy Young- and MVP-winning season. Finally, the Toronto Blue Jays, who hope to fly away with the AL East title at the expense of the Orioles, Yankees, Red Sox and Tampa Bay Rays, will not likely need to rouse fans on Sept. 9, especially if they are in contention. But they will make sure they make it to their destinations in time by distributing an alarm clock that blares the “Get up” home run call that has made announcer Buck Martinez endearing to our neighbors to the north.

With all of this explained, there is really only one more thing to say: Play ball! Enjoy the season, everyone.

Label Suppliers Move Forward After a Year of Ongoi