This has got to be one of the strangest, short-lived protests ever. The World Umpires Association banded together to wear white wristbands to protest "abusive player behavior" after Ian Kinsler, the Detroit Tigers' second baseman, was fined for verbally attacking umpire Angel Hernandez.

The World Umpires Association (WUA) proclaimed that the commissioner's office should have suspended, not just fined, Kinsler. Kinsler, on the other hand, said Hernandez "just needs to go away," according to The Los Angeles Times.

“The Office of the Commissioner's lenient treatment to abusive player behavior sends the wrong message to players and managers," the WUA said. "It's open season on umpires, and that's bad for the game. Enough is enough. Umpires will wear the wristbands until our concerns are taken seriously." 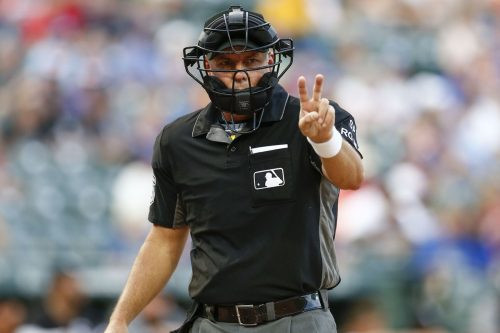 But, could it be that it only took one day of wearing these white wristbands in protest to be taken seriously? The WUA announced it will cease wearing the wristbands, and will return to regular attire, which Deadspin pointed out might still consist of non-protest wristbands.

The end of the protest comes in response to the commissioner's proposal to meet with the Union's governing board. But who's to say what the outcome of that meeting will be? Did the WUA end its protest too early?

We'll see how this meeting goes for the umpires, but if the umpires succeed in their quest to be taken seriously, wristbands could become the new protest garb.