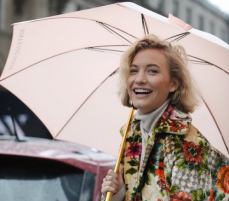 It was a rainy day in New York City on Tuesday morning, and while that might be enough to keep New York Fashion Week attendees running for cover, Moda Operandi tried a different approach.

According to WWD, the fashion brand had a crew ready outside the Tory Burch show at the Lincoln Center to hand out light pink umbrellas branded with the Moda Operandi logo in gold block letters. Not surprisingly, the umbrellas were gone in a flash.

The Moda Operandi team then took more umbrellas to give away outside the Vera Wang and Rodarte shows, culminating in a promotional giveaway of 500 umbrellas.

The company announced the giveaways via Twitter, labeling its guerrilla marketing team as "man servants."

The #ManServants strike again! ☔️ @zanitazanita is saved from the rain by her M'O umbrella #NYFW #FW16 pic.twitter.com/rtXbLvuO6U

Promotional Jackets and Outerwear: Trends to Watch in a Changing Market