With the National Hockey League having recently concluded its centennial celebration, players, owners and fans should consider themselves very pleased with the state of their beloved sport, which this season has already produced some amazing results—come on, who, even with their geographic location, could have bet that the expansion Vegas Golden Knights would hold the Western Conference’s best record? The game is thriving in many markets, and numerous entities are looking for financial windfall based on both the excitement that it is generating and the revered longevity of many of its clubs. Molson Coors Canada sought to set its overseers hopping with joy by issuing eight beer glasses, including holders bearing the logos of three franchises situated within the country, but the commemorative containers left eight people injured, prompting a recall. 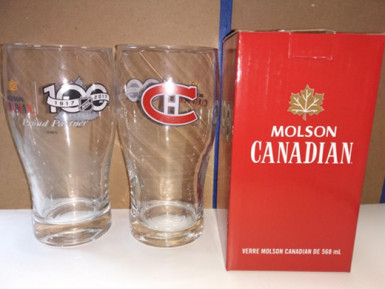 Molson Coors Canada acknowledged eight teams through the glasses, including the Montreal Canadiens, the NHL's most successful franchise. (Image via healthycanadians.gc.ca)

The limited edition products had been the company's means to praise the Boston Bruins, Chicago Blackhawks, Detroit Red Wings, Montreal Canadiens, New York Rangers and Toronto Maple Leafs—the league’s Original Six—as well as the Edmonton Oilers and Ottawa Senators. (Had it not been for the recall, supporters of Canada’s other squads—the Calgary Flames, Vancouver Canucks and Winnipeg Jets—might have had reason to complain.) However, Molson finds itself in a figurative penalty box, as 11 end-users reported the glasses had broken as they hand-washed them. The 20-ounce commodities, which, along with the artistic identifiers for the aforementioned teams, feature the league’s centennial logo, went out in October and November through special cases of Molson Canadian and via an internet promotion.

Totaling 215,000 glasses, the recalled items pose “a laceration hazard,” according to Health Canada, which launched the request for return on Friday, 11 days after Molson’s receipt of the most recent complaint. Given the rarity of anything reaching centennial status, this incident could receive why-did-this-have-to-happen-to-us distinction among the Molson brass, but the powers that be have set as their goal the replacement of each potentially flawed glass, which it sold exclusively in Canada. Health Canada is encouraging hockey-crazy consumers to have Molson make amends as soon as possible so as to avoid the risk of further injury.