More Public Schools Are Requiring Uniforms Than Ever Before

In the U.S., so much goes into the consideration of what might help public school students to enjoy a fruitful educational experience, with the strength of curricula, the dedication of parent-teacher associations and the degree of community commitment registering as three of the biggest. Over the last deadline, such institutions have also devoted more discussions to students’ attire, and many have decided that requiring uniforms influences student morale just as positively as the aforementioned must-haves and other components. This alteration could prove quite a boon for sales-minded distributors.

Those among us who attended Catholic or private schools know all about donning uniforms, but those who mastered the three Rs in public schools mostly likely did so while being able to wear whatever their respective sites deemed permissible. Since the turn of the century, though, many students in the latter destinations have broadened their brains while dressing in uniforms, with the National Center for Education Statistics noting that 21.5 percent of public schools in America mandated uniforms two years ago. That figure represents a 7.7 percent rise since 2006, and therein we can find plenty of opportunities not only for people to address the on-location benefits of encouraging uniformity but also the far-reaching economic possibilities. 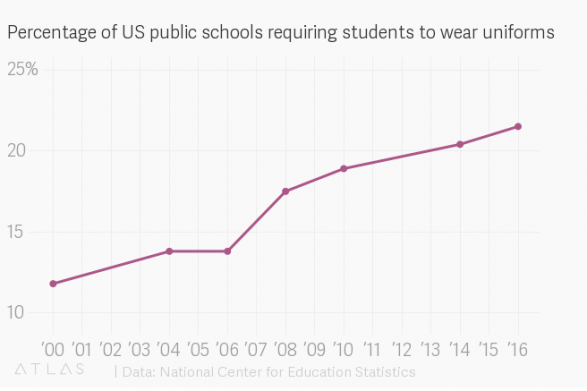 Promo Marketing’s Philadelphia home base can include itself among the major cities whose public schools necessitate uniforms for its student body, with the last decade certainly seeing the sort of change that the previously noted statistics address. Anyone in this metropolis who takes public transit, especially our Broad Street Subway and Market-Frankford Line, will see many pupils heading to or from their respective schools in their uniforms, which all have some sort of signifier to distinguish where the budding geniuses attend.

From a design perspective, uniformity equals opportunity. While one might find that statement strange—there is the presumption that apparel sales always depend on trends and unique concepts—it is more appropriate to see how the increasing reliance by public schools on set clothing guidelines can be more of a game-changer. Simply put, if schools are saying they want for their students to reach for the same garments five days a week, businesses can make their pitches for repeat business through offering sturdy fabrics and eye-catching indications of each school’s name.

As more public schools make the decision to require uniforms, more chances will arise for promo distributors to align themselves with districts. In doing so, they could come to take on roles comparable to those of textbook and meal providers, in that they are not only assisting with brand awareness but also working on intensifying their own.