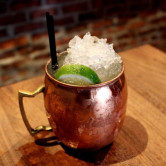 The state of Iowa warned that copper Moscow Mule mugs could potentially be dangerous. | Credit: Bevvy by Will Shenton

Moscow Mules are all the rage right now. They've seemingly gone from obscure cocktail to the most popular drink at bars. Part of the fun might be that the drink comes in a copper mug, adding a bit of rustic charm to the whole deal. But, after the Iowa Alcoholic Beverages Division issued an advisory that the copper mugs could be harmful, people kind of freaked out. Because of this, bartenders in Iowa can no longer serve the drinks in their intended mugs.

It's not quite as drastic as some headlines claiming that the mugs are "poisonous" might seem, but it's not something to be ignored, either.

Here's what's going on: According to Business Insider, the state of Iowa follows the FDA code that prohibits copper from coming into contact with acidic food with a pH lower than 6. This includes Moscow Mules, which contains plenty of acidic ingredients.

"High concentrations of copper are poisonous and have caused food borne illness," the Iowa bulletin says. "When copper and copper alloy surfaces contact acidic foods, copper may be leached into the food."

That sounds alarming, and, from a scientific perspective, it's technically correct. (Which, some might argue, is the best kind of correct.) But, it's also a bit misleading.

While copper theoretically could seep into the drink and, therefore, theoretically harm you, it would take quite a bit of Moscow Mule drinking to really have a serious effect.

Bill Marler, a food poisoning attorney, told Business Insider that people would have to drink acidic drinks from a copper cup with every single meal every day for 25 years. You'd get sick of doing that before you got sick from copper poisoning.

The 3 Product Categories Seeing the Most Demand

Our 5 Favorite Promotional Products of the Week: Baseball Bat Mugs and More