There has been little debate among public health professionals that widespread mask use is crucial to slowing the spread of SARS-CoV-2, the coronavirus that causes COVID-19. Where there has been some debate, though, is over the most effective face mask types outside of the approved medical-grade varieties. Which of the now dozens of face coverings available to the American public protects the most against transmission of the virus? We're at least one step closer to the answer.

In a study published this month in Science Advances, a peer-reviewed journal, a team of Duke University researchers tested 14 different types of face coverings in a variety of common materials and fabrications. Using a cardboard box, a laser, a lens and a cell phone camera, the researchers tested each mask by having a wearer speak and measuring the ensuing droplet emission. Here's how the process works, as described in the study:

In brief, an operator wears a face mask and speaks into the direction of an expanded laser beam inside a dark enclosure. Droplets that propagate through the laser beam scatter light, which is recorded with a cell phone camera. A simple computer algorithm is used to count the droplets in the video. The required hardware for these measurements is commonly available; suitable lasers and optical components are accessible in hundreds of research laboratories or can be purchased for less than $200, and a standard cell phone camera can serve as a recording device. The experimental setup is simple and can easily be built and operated by non-experts.

“We confirmed that when people speak, small droplets get expelled, so disease can be spread by talking, without coughing or sneezing,” Martin Fischer, Ph.D., an associate research professor at Duke and one of the study authors, said in a press release. “We could also see that some face coverings performed much better than others in blocking expelled particles.”

Among the mask types tested were many now common to the promotional products industry, including an N95, a surgical mask and several varieties of cotton masks. Unsurprisingly, the fitted N95 performed best, with a sub-0.1 percent relative droplet count, effectively blocking all droplets from passing through. The surgical mask also performed well, registering right around a 0.1 percent relative droplet count.

After that, the results might be somewhat surprising. The polyester/cotton mask and the polypropylene mask were the next most effective, coming in just behind the surgical mask. Each of the five varieties of cotton mask also performed well, though with more variance. On average, cotton mask No. 5, for example, registered just below a 0.2 percent relative droplet count, but tested as high as a 0.3 and as low as a sub-0.1 depending on the speaker. Here is the full results table: 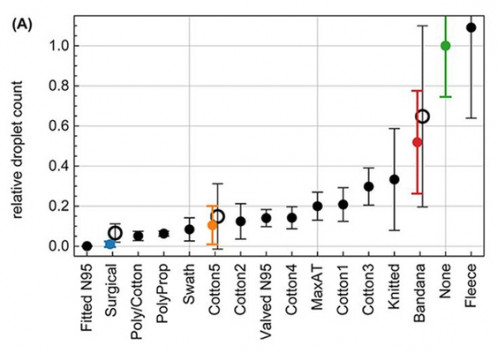 Droplet transmission through face masks. Relative droplet transmission through the corresponding mask. Each solid data point represents the mean and standard deviation over 10 trials for the same mask, normalized to the control trial (no mask), and tested by one speaker. The hollow data points are the mean and standard deviations of the relative counts over four speakers. | Credit: Science Advances / Duke University

There were a few other interesting results. The valved N95 tested worse than seven other masks, including two of the cotton varieties, which supports the existing understanding that valved respirators aren't as effective at blocking droplet transmission from the wearer. The fleece gaiter actually tested worse than no mask at all, breaking larger droplets into smaller ones that were more easily transmissible.

The gaiter finding, in particular, generated big headlines in The Washington Post and elsewhere, though there are some nuances to consider. The study tested only one type of neck gaiter, made from polyester spandex. Chris Bernat, co-founder of Vapor Apparel, a performance apparel manufacturer and decorator that is mostly producing gaiters during the pandemic, said that the gaiter in the study may have been made from lower-quality material.

"Not all gaiters are made the same," Bernat said. "Your average lower quality gaiter is 80-100GSM fabric. We make one that is 135GSM and have developed a much heavier one for the winter." The Washington Post later updated its story with feedback from Bernat. “Chances are [the tested gaiter] was a promotional quality, like a lower-quality fabric, and based on that I’m sure it didn’t perform well," he told the publication. 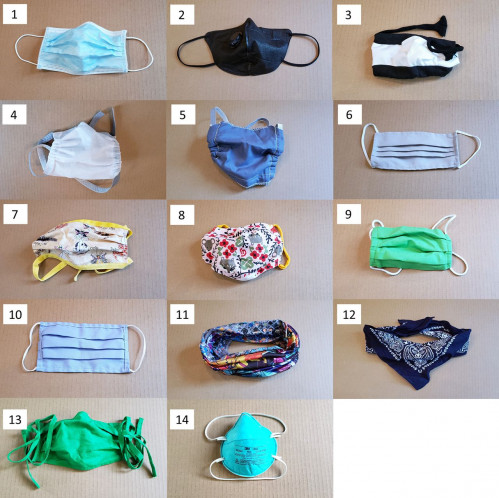 The researchers acknowledged in their published report that the study had certain limitations, mainly related to the cell phone camera. Differences in each speaker's physiology (multiple people participated in testing the masks) also led to variations in mouth position relative to the light sheet that captured droplet emission. Since the testing setup samples only a small part of the enclosure and the laser beam is narrow, some droplets might not register, the researchers said in their report.

More testing is certainly needed, but the Duke team's research is a starting point to better understanding each mask type's protection capabilities. Fischer said he hopes mask manufacturers can apply or adapt the testing method to their own products.

“This was just a demonstration—more work is required to investigate variations in masks, speakers and how people wear them," he said. "But it demonstrates that this sort of test could easily be conducted by businesses and others that are providing masks to their employees or patrons."