New Yorkers could buy the cards for face value, making them no more valuable than the classic yellow ones, but the highly sought-after Supreme logo has boosted the special cards' value. According to the New York Daily News, the Supreme cards are selling between $40 and $130 on eBay. The cards are, however, loaded with two fares, making it at least worth $5.50. 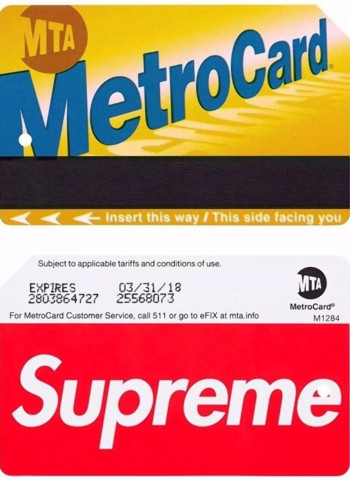 The MTA collaborated with Supreme for MetroCards, and fans of the brand showed their loyalty. (Image via New York Daily News)

On Monday morning, New Yorkers were lining up to buy the Supreme cards, just like they would stand outside of a brick and mortar shop to buy the latest Supreme items.

This speaks volumes to the power of brand loyalty. MetroCards are just a way of life for people in the New York metropolitan area, and don't usually bring about this much hype. But, when they slapped a popular logo on them, they became that much more valuable.

For the record, the MTA has been selling ad space on their MetroCards since 1995.