Like the human versions of millennials, the MTV Movie & TV Awards, at 27 years old, are constantly looking to reinvent themselves and stay fresh. While the ceremony has gone through many category alterations, it has also upped its promo game, with this year’s celebration featuring a gift bag that, thanks to Backstage Creations, left nobody empty-handed, regardless of the contents of the winners list. 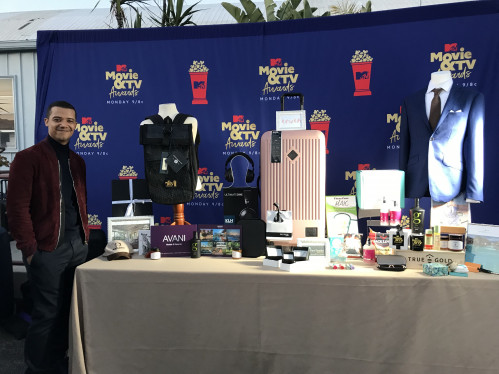 Jacob Anderson, who portrayed Grey Worm on "Game of Thrones," was among the celebrities gifted with the goods. | Credit: Backstage Creations

MTV has helped the summer gathering to become a very accomplished grandchild, if you will, of the 90-year-old Academy Awards, and said descendant has come to love to prove that it cares about commending nominees, presenters and performers not just with applause and golden popcorn statues. Monday’s broadcast from the Barker Hangar in Santa Monica did far more than grant kudos in 14 categories. It also gave nearly two dozen businesses a chance to cozy up to the celebrities through the gift bag’s contents, and while many of the offerings were experiential in nature, a few resounded as promo victories for the entities who are looking for as much attention from the notable figures as those individuals are seeking from their fans.

Since everyone loves lists, if someone were to inquire about our three favorites, we would immediately declare the KLH Ultimate One headphones, the Thera Cane MAX Trigger Point Massager and the www.mycandle.com components as our favorites. Oh to be a celebrity regarding the first item (those bad boys will set us mere mortals back $299), but a Backstage Creations release states that they feature “50mm Beryllium drivers, real ebony wood earcups and top-grade leather for maximum comfort and durability.” We wonder if the winners will be using them to amplify any replays of their victories and “thank you” speeches.

Health and wellness goods have exploded in the promo world as of late, so we would not mind mimicking the upper crust by coming to own the point massager, which Backstage creations vows “makes it easy to apply pain-relieving deep compression directly to hard, knotted ‘trigger points’ anywhere they occur.” Um, yes, please! Ditto for the final element of the trio, whose website promises a personalized candle “in just four simple steps.”

The other products in the gift bag are surely going to delight the recipients as the summer unfolds, and that reflects an insightful nature on the part of MTV. The pageantry of the awards could serve as enough glitz and glamour for the attendees, but MTV definitely wants and needs to stabilize its brand standing, so catering to the higher-ups with gifts resounds as a strong way to do so. Like the Academy Awards and Grammy bags before it, the MTV compilation proves that pampering is never going out of style and that we are impressionable consumers since we are checking our piggy banks to see long it might take to buy those headphones.