How Much Is an Oscar Really Worth? 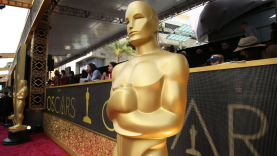 While recipients can't sell their Oscars for personal gain anymore, they're still worth quite a bit. (Image via Twitter)

For aspiring actors, holding the Academy Award is a dream. While it has immense sentimental value for Hollywood elite and beginners alike, how much is it really worth, though?

That's only taking into account new Oscars. We're getting back to that whole sentimental value thing.

Some recipients have sold their awards, which go for some hefty prices.

In 1950, though, the academy prohibited the sale of the awards for profit. Now, all winners sign an agreement the night of the ceremony that mandates if they want to sell the award, they first have to offer to sell it back to the academy for $1.

Awards given out before 1950, however, are still up for sale if the owner decides to make a little extra money. In 1999, Michael Jackson reportedly spent $1.5 million for producer David O. Selznick's Oscar that he won for "Gone With the Wind" in 1939."

Comparing it to the Golden Globes again: Golden Globe winners are free to sell their awards and make between $100,000 and $120,000 in profit.