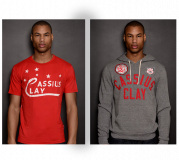 Muhammad Ali's death could cause a surge in demand for Ali-branded merchandise, like these T-shirts. (Image via muhammadali.com)

Legendary boxing champion and activist Muhammad Ali passed away last week. Regarded by many as the greatest of all time, Ali's impact on the world of boxing and the world in general will live on for a long time. Because of this, sources believe that Ali's name and brand will spur a huge growth in revenue in the near future.

According to NBC News, Ali sold an 80 percent stake in the right to license his name and brand in 2006 for $50 million. In the five years prior to this, Ali's intellectual property earned between $4 million and $7 million annually.

Last year, Under Armour released a series of apparel and other gear featuring pictures, slogans and references to Ali.

"[His death] will spark a significant increase in sales of his branded merchandise and memorabilia," Dorfman said. "His name and likeness will continue to be a highly valuable commodity for years to come."

Just after the musician Prince died in April, we saw a huge surge in Prince-branded memorabilia, specifically out of his home state of Minnesota. That was, at least, until Minnesota lawmakers rushed to pass a bill to limit merchandise depicting deceased celebrities' names and likenesses in the state.

The Ali intellectual property currently belongs to Authentic Brands Group, a New York City-based licensing company. After purchasing the Ali license from Core Media Group in 2013, the company has used the boxer's likeness in collaborations with brands, such as Supreme and Porsche, and has made Ali merchandise available on the sports e-commerce platform Fanatics.

In addition to the already large amount of apparel and merchandise celebrating Ali's legacy, there will, no doubt, be even more merchandise on the way commemorating his passing.