If you have been paying attention to the ongoing impeachment processes, you might have noticed that when Speaker Nancy Pelosi signed the articles of impeachment against President Trump, she was using some custom-made pens.

There was a rumor that Pelosi spent $15,000 on the pens (one rumor even claimed $450,000), but that was pretty swiftly debunked after her chief of staff told Snopes that the real price was about $450. 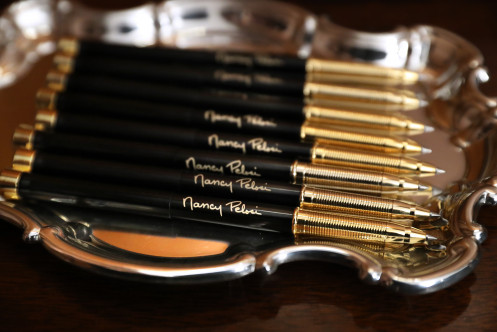 Pens with U.S. Speaker of the House Nancy Pelosi's (D-CA) signature are prepared for the engrossment ceremony of the articles of impeachment against President Donald Trump in the Rayburn Room at the U.S. Capitol January 15, 2020 in Washington, DC. The House of Representatives voted to approve the managers and send the articles of impeachment to the Senate. | Credit: Getty Images by Chip Somodevilla

With a little additional digging, we found that the pens were created by Garland Writing Instruments in Coventry, Rhode Island.

"Any time you can be part of history for whatever reason, it definitely makes you feel proud," Garland Writing Instruments owner and president Rick Becker told WPRI. "And for people back here who actually make them, it's a sense of pride."

The pens got even more attention after Pelosi handed them out to her fellow lawmakers during the signing. 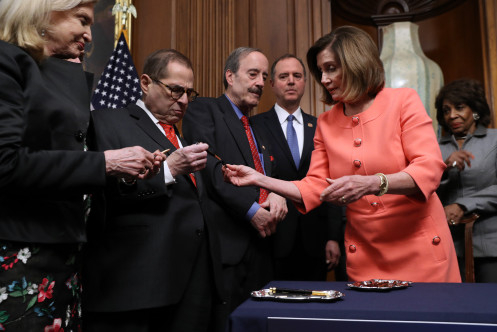 For what it's worth, too, Becker also addressed the rumors of the price, saying that while he'd love it if she had spent that much, he's not charging that kind of money for the pens.

"There were some things that I read that the pens were $2,000-plus each, which I'm happy to charge someone that," he said. "But obviously that is about 100 times inflated."

He said the laser-engraved pens were really about $20 each.

This isn't the first time Becker's products have been used for official purposes. The supplier's items have been used by multiple government agencies, including Congressional offices and the White House.